There were ‘best intentions’ and finding the lost jewel of police firearms instruction that occasioned my fall from “thorough research.” A friend posted a missive from noted former firearms trainer Andy Stanford about the passing of career cop/firearms instructor/Gunsite RM Mike Waidelich, formerly of the Bakersfield (CA) Police Department.

The story told is related here. I noted in that piece that the target was described as follows: “According to the source, who quoted Andy Stanford, the 10-point scoring zone was around 9” x 13”. I don’t know how he handled rounds outside the 10-point area.”

That was from the block-copied/pasted information from my friend on social media. It is also bogus.

On the rather informative pistol.com forum, I found a reference to the old Bakersfield PD course of fire. Everything was the same … except the following, again describing the target: “Mike told me the 10-point scoring zone on the silhouette target was, as best he could recall, a 7-inch circle, with the next zone (9 points) measuring 9×13 inches. A hit anywhere else on the silhouette scored 6 points.” 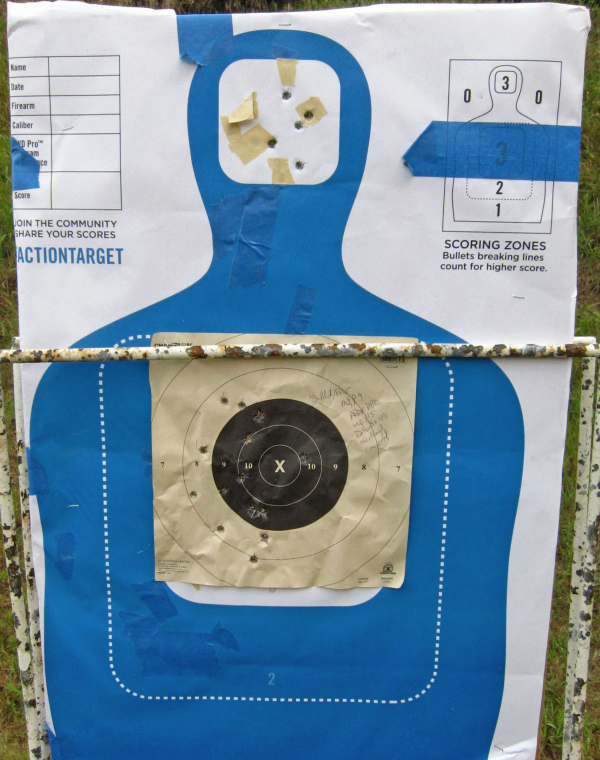 Just a minor difference in 'thorough research,' the "8" ring of the B-8 repair center measures eight-inches in diameter; that's what it takes for full-value scoring on the course, though it really should be a seven-inch circle. Still, it's closer than the full-value scoring of the TQ-15, closer to the "down-1" of the original BPD target.

Well, then. That’s screwy. One of those posting in the comment thread said he shot the course, attaching the NRA B-8 repair center to the middle of the silhouette. He then used the 8” 8-ring for his maximum scoring area – the size of the “-0” zone that is standard in IDPA.

I also noted that industry luminary Wayne Dobbs of Aimpoint and HiTS fame considered the age of the Bakersfield course and figured that there was a .3 second “fudge” factor from the days when the start signal was a stopwatch and a whistle. The timers of today are far more precise, though one trainer told me he considered the .20-.30 “tone” from the timer in calculating whether students “made the time” or not. While I didn’t think it that big a deal, I decided to score both ways going forward. 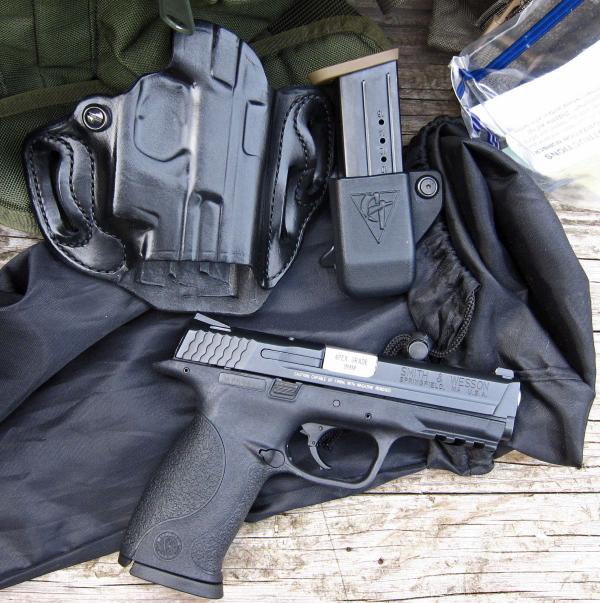 It just so happened I was still evaluating another standard, this for carriers of concealed weapons, and I was using guns I’d not used in some time. One had sights replaced and I just hadn’t gotten around to seeing where the point of impact was … as it’s a retired carry gun, it wasn’t a priority before. I also intended to use a full-size service pistol, an earlier issue S&W M&P9 with an Apex barrel fitted by Apex Tactical, to see how well I did with the non-micro-subcompact-moderate capacity guns prevalent in the new market today.

Today is the tale of the lightly customized M&P9.

I set up with the Action Target version of the NRA TQ-15 target and covered the 9 ½” wide x 10 ¼” high maximum scoring zone with the B-8 repair center. The target is printed on 10 ½” square target paper. Using the standard of the first commenter on the thread, hits inside the “8” ring count 10, anywhere else on the repair center is worth nine. As those marks are a bit big, anything on the silhouette but off the repair center is worth five not six as originally stated. 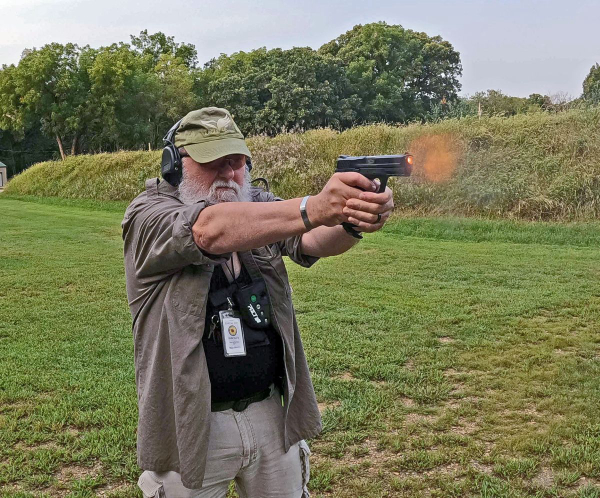 Slightly slower to draw, an unaccustomed feel, didn't prevent a good performance of the service-size pistol on target. Below, the times are short enough up close to call for "the hammer." 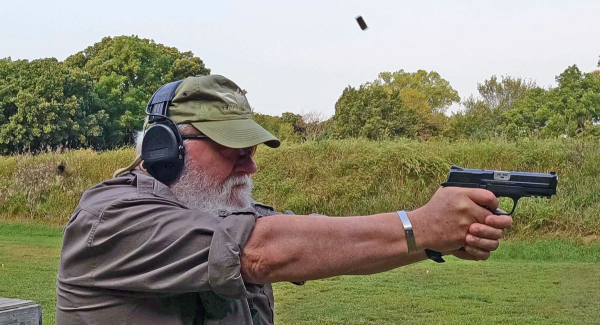 The standard BPD course … as follows, all from the holster:

The first gun tried – and reported on here -- was the M&P9 (first generation) with that fitted Apex barrel and factory-installed night sights. Ammo – for both guns – was Winchester "USA White Box" 115gr. FMJ. The holster, worn concealed, was the DeSantis #002 Speed Scabbard. The spare magazine was a Comp-Tac single mag pouch.

As is my protocol, I start with five one-second “high percentage” singles. These are fired at 10 feet, starting with hand on the holstered handgun. My times were not stellar, as my best was just over one second. I guess the shorter guns clearing the holster quicker made the difference.

I followed up with my rendition of the Florida Department of Law Enforcement qualification stage two. This calls for a pair from ready – I use a legit low ready -- from ten-feet, not their “one-to-three yards.” Using the B-8, I was surprised to make the hits in .98 – 1 second. Like FDLE, I run this twice.

Shooting the Bakersfield course, as I now understand it, I lost two points due to time, but the hits stayed inside the “8” ring. This gave a satisfying 98/100 run.

I believe this kind of close quarters evaluation adequately assesses the balance between precision and speed. That covers the shooting solution, but there’s so much more to be considered in self-protection. And I’ll cover my continuing struggle with this course of fire in later editions of this service and the Shooting Wire.