I like several of the courses I’ve seen developed to get appropriate accuracy at acceptable speeds up close, but I felt there was something missing. A “documented standard of achievement,” even if it’s something you’ve never trained up for, can teach lessons. I’ve been seeking some relatively close range, precision with speed courses of fire.

With that in mind, in my internet travels, I’d seen someone mentioned that I don’t recall ever hearing of before – someone I should have heard of.

To shorten the story, Mike Waidelich, a US Army veteran and shooter on the SW Pistol League became a member of the Bakersfield Police Department in around 1968. He was one of the first instructors at the American Pistol Institute – Gunsite – and became Rangemaster at Bakersfield PD.

A rough beat, they’d had issues in hitting the mark operationally. The Chief apparently asked Mr. Waidelich if he could sort that out. It ended up, it’s said, that their hit ratio was hovering around 85% back when the national average was estimated to be around 15%. His qualification was ten rounds fired in four strings; all starts from the holster.

The way the course distances were described on social media was in common descriptions; the first string was a pair in 1.5 seconds at ten feet – “no one should be closer than that,” the description read. We all know we have to get closer and I imagine the directive was “get no closer without a plan to go hands on – and not without a cover officer.” 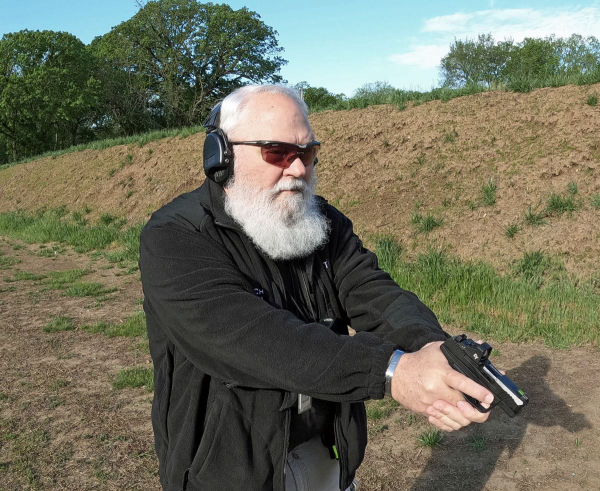 No "high point from ready gun" here a legit low ready, with the muzzle aimed in below the target frame. Below, the Ruger MAX-9 was not fatiguing to shoot. 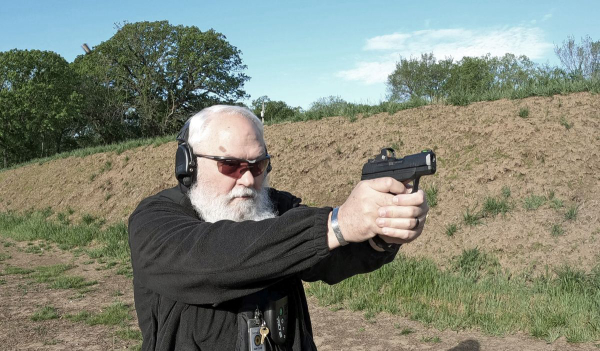 The next string was “the length of a car,” back when they made automobiles – this was around 20 feet, it’d be less for a good many micro-jalopies of today. That pair was delivered in two seconds. At 30 feet, “from the curb to the front door,” it’s a pair to an empty reload, followed by another pair in six seconds (eight if you’re armed with a revolver). Finally, at sixty feet – “from the opposing curb to the front door” – it’s a pair in 3.5 seconds. According to the source, who quoted Andy Stanford, the 10-point scoring zone was around 9” x 13”. I don’t know how he handled rounds outside the 10-point area.

But going over time was not disqualifying; it was preferred you make the times but you’d receive a penalty if you went over. The description was “one point down per quarter second over time.”

“Passing” was 80/100 at the outset. For time penalties, I opted to use five points down per second over, instead of the nominal four points per second over. As I’m not sure about target dimensions and how he dealt with hits on target outside the max scoring area, I don’t think it hurts anything.

I wanted to try the course – even with blanks to be filled in – as they seem quite relevant to my objectives. Still, I wanted to add a “high value, close range” segment as suggested by Claude Werner, the Tactical Professor. This is five repetitions of a single to the head box of the target from 10 feet. From somewhere I saw a recommendation of starting with your hand on the holstered handgun -- as if you were alerted to a potential problem. At the tone, you draw to a single hit. While I can’t find the source, I seem to recall that the objective is to make that hit in less than a second. It’s pretty quick for that size target even at that short range.

Florida’s state law enforcement (FDLE) course has a couple of interesting stages, but the one I tried was “Two hand high point from ready gun, Single target, 3-yard line; 2 rounds in one second. Repeat two times for a total of six rounds.” While I wanted to use it, I don’t follow instructions well, stayed at ten feet and used a legit low ready (“no muzzle on meat,” aimed in at the dirt below the target frame.) 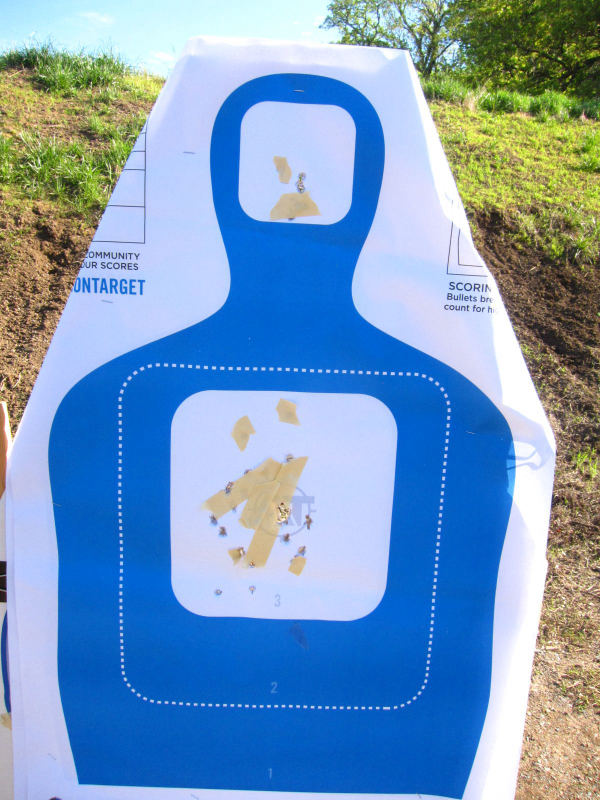 The target from the Ruger MAX-9 was shot clean. The only penalties were time penalties. Below, the Gen5 GLOCK 23 ran well at speed. 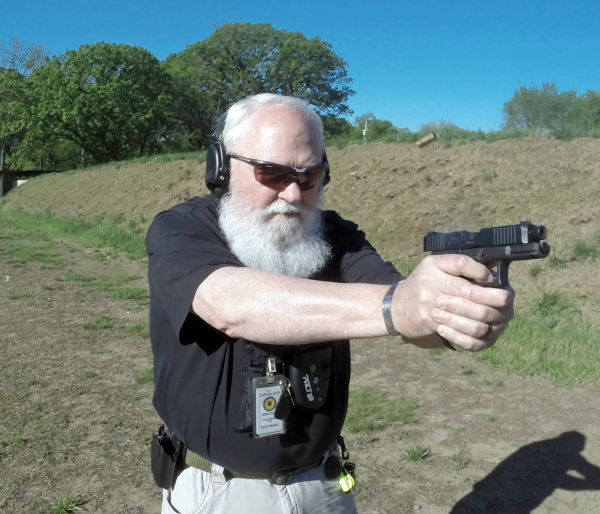 I followed that with the (reported) Waidelich-Bakersfield Police qualification (10-round course). I used the Action Target TQ-15 as it was handy and it features a 9 ½” wide x 10 ¼” high maximum scoring zone – close enough. Inside that ring, it’s ten points, just outside in the “nominal 4” I considered it 8 points – for now -- and outside that is a miss.

The guns I used included the Ruger MAX-9 with CTS-1550 using Monarch Steel-case 115gr FMJ and the Gen. 5 GLOCK 23 using Speer Lawman 165gr FMJ. I also tried another centerfire gun that I can’t discuss at the moment and I even gave it a whirl with a Smith & Wesson M63 3” 22 revolver.

For the Ruger, cheating with an optic, at the close ranges I never saw the “dot.” I didn’t miss either, though the times were not optimal – not that I was waiting on finding the dot. As I’d moved the point down from a nominal four-per-second late to five, my times were not impressive. The reload was particularly egregious. My “score” with the Ruger was 88/100 – all lost time.

With the Gen.5 GLOCK 23 – quite the shooter – I contrived to shoot unlocked on one stage, giving me one point less than the 9mm. My times were quite good on the FDLE stage, with pairs going in at less than .9 second with good hits.

So much for the compact 40 Auto being hard to handle at speed.

Likewise, being bigger than the Ruger MAX-9, the GLOCK 23 gave me more magazine to hold onto, yielding a superior reload time – I had time penalties, but it was less than with the gun with the stubbier magazine.

The Ruger MAX-9 handles and shoots well. It is enough smaller than the G23 that the times suffered. I didn’t “fail” with either gun, exceeding the 80 point minimum of the original course of fire. As for the Ruger MAX-9 and GLOCK 23, there’s been no adding of lubrication and no cleaning yet. The 9mm is running great and isn’t fatiguing. The G23 is a dreamboat, handling very nearly like a G19. If you have 40 ammo or you work for a 40 caliber-issuing agency, the Gen. 5 guns are, by far, the way to go in the GLOCK world.

I’ll be working with this standard again.