Take the current craze for micro-sized/moderate capacity 9mm pistols, change it to appeal to those who have physical disabilities due to age or disease, or physical size and strength disparities, chamber it in 380 ACP – and you have the Ruger LCP MAX. 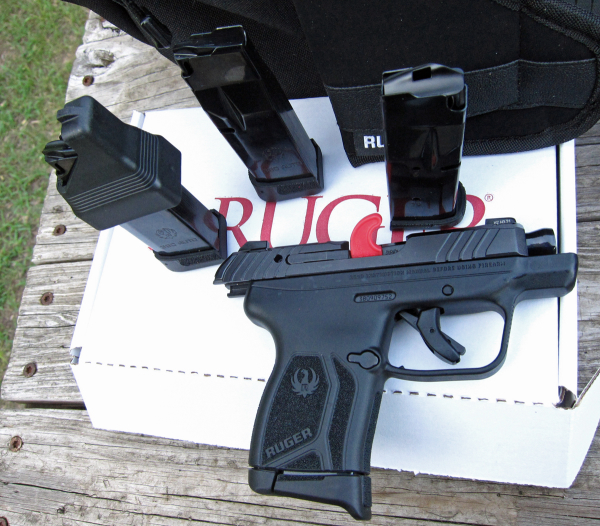 Lighter, smaller and featuring less snap and blast than 9mm micro-compacts, while fitting legacy LCP/LCP II holsters, Ruger may have found a credible niche in the concealed carry market – and filled it.

So, what’s the big difference between legacy LCP models and the new gun? That depends on your viewpoint. The new gun has – what the manufacturer calls – useful, visible steel sights. They are higher, the rear has the fashionable flat “ledge” if you want to cock the piece one handed. It has a tritium vial in the front sight … yep, an LCP with night sights. The pistol’s overall design is based on the LCP II. 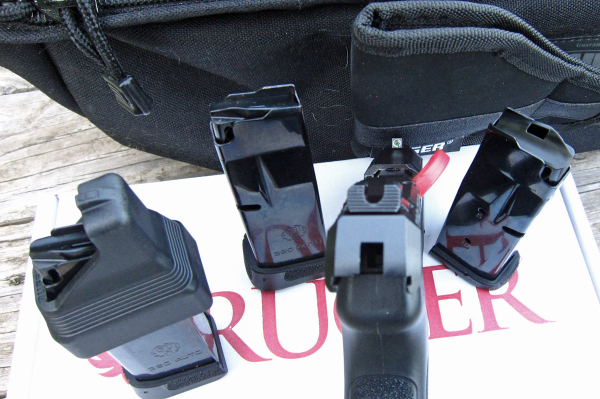 What if you don’t like the sights? Look for sights that fit the Bodyguard auto … I know XS Sights makes them, I have them on a Bodyguard. Those sights will fit the new Ruger. The factory rear sight having a generous U-notch, I don’t believe I’d be doing any changing of sights.

The MAX seems to fit other holsters meant for the LCP II – another great advantage – and the rear of the slide has “cocking ears” – that I wouldn’t have noticed except it was listed on the factory information. Those can be handy.

The grip frame has the ergonomic aspects of the LCP II while it’s slightly larger. And, for those who were waiting, the magazine capacity … 10 + 1 … if you don’t use the accessory 12 round magazine.

Having had the experience, let me cut to the chase: the “easier to shoot” 380 pistol also has magazines, 10 and 12-round capacities, that are easy to load. They’re not as “easy” as the six-round LCP magazine, but easier than a number of the micro-compact/moderate capacity 9mm pistols. 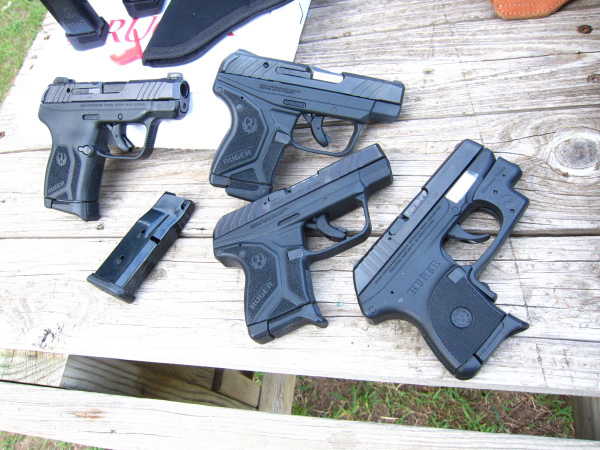 The Ruger LCP MAX (left) is part of the family of tiny Ruger pistols. The Ruger "Lite Rack" LCP II 22 LR (top), Ruger LCP II and the Ruger LCP (with Crimson Trace laser) are also in the 'family photo.'

Since it’s a new gun and people expect it, here are the accuracy results from twenty yards.

Note that the point of aim/point of impact disparity could be a matter of shooting over a range bad and not simply shooting from a braced but not supported position. It takes the rest of the evaluation to sort that out.

After this performance – and wondering how that would play out at distance – I elected to try a full-size police silhouette at fifty yards. This was three rounds, my usual for the pass-fail “Asym” exercise on a B/C zone silhouette (somewhat smaller). I used Black Hills 90 grain JHP ammo and shot singles from low ready. I held on the “high thoracic” area of the target, a cardboard KS-Q, and the three rounds hit low and right over a ca. 7” spread. Two were centered and could still have been “C” zone hits with the third low enough and close to the 4/3 border on the silhouette to be a miss on the smaller target. 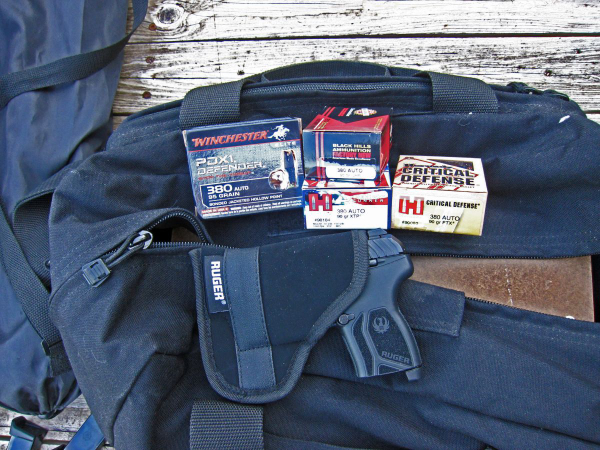 The ammo tried for accuracy appears above. Below, the Hornady American Gunner group followed by the group fired with Hornady Critical Defense ammo. All shot below point of aim at twenty yards. 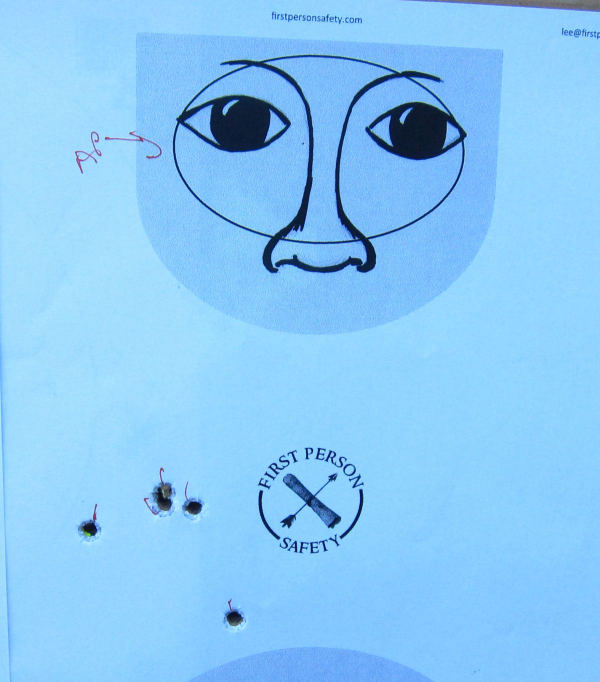 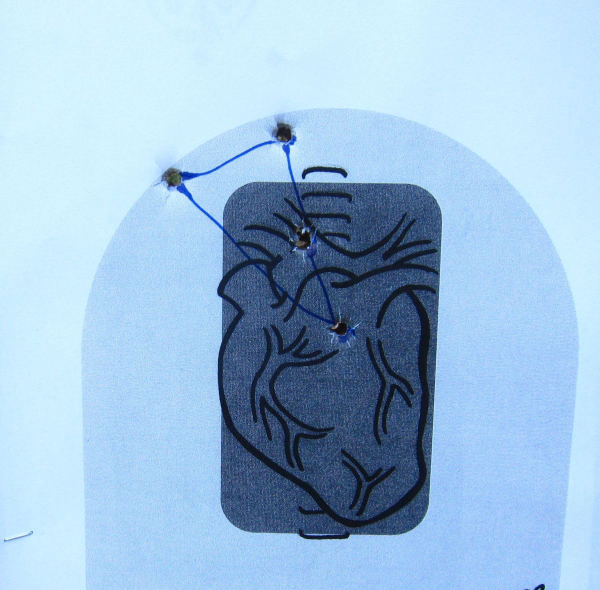 I believe the third shot was a shooter-induced flyer. From a micro 380 with only a slightly larger gripping surface to hold, that’s decent shooting.

To see if the gun could handle some speedier close-in shooting, I tried the close-range standards. Using Monarch steel-case ammo, a bad choice for this sample, I had the only stoppages I experienced with the gun. In fact, I figured it was my thumb slowing the slide – but I’m not yet sure about that. Using the supplied pocket holster, marked “Ruger,” I had the holster come out with the gun once.

Get another pocket holster for this heater. It’s nice they provide one and, if you think about it, you can prevent the holster from exiting the pocket – but I can’t bank on it.

Even with that problem, my times with the “Waidelich” course analog were pretty good. The “high value, close-range” component was slow and I was hampered by misses. The “pair in a second from guard” from 10 feet yielded clean hits, but one slow time – the best time was .91 second, good for a tiny pistol – even a 10-shot 380 Auto.

The gun is certainly capable, giving a score with penalties of 88/100. That’s as

good as some of the larger guns I tried on the course. 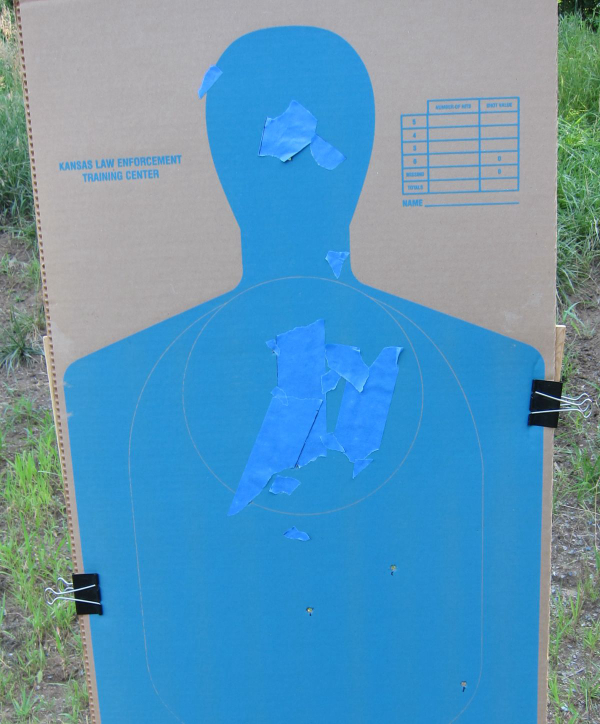 Three rounds of Black Hills 90gr. JHP fired from fifty yards -- if you look carefully you can see the group low on the silhouette, all inside the secondary scoring zone -- from a light, subcompact, short-barrel 380 Auto.

Conclusions? Just over 10 ½ ounces empty, with a relatively “large” set of sights – with tritium up front (and not in the rear sight, as is my preference), the LCP MAX is made for those who want one of those trendy micro-compact/mid-capacity 9mm pistols without the snap and blast of the 9x19mm in a short barrel/short frame combo.

While I can still function with full power 9mm in such a package, the LCP MAX is LCP-sized; it fits the LCP holsters in which I’ve tried it. The differences include the better sights – already mentioned – and more “BBs” in the cargo hold. Why do you need more ammo?

Some will say that the pathetic 380 ACP needs all the help it can get. I’m not buying. In reality, the added weight of the extra ammo – four rounds or six, depending on magazine – helps you better control the little beastie.

The better sights make passing the Wizard Drill, the “Test” and other range evaluations easier, while making real world use more certain … if you can shoot.

The ergonomics are LCP II-good, made a little better by slightly more width. The 12-round magazine makes it easier to make those longer shots, should one be necessary (or well-advised), and add little to the size of the gun. It’s still pocket-sized. And it’s relevant to compare 13 rounds of 380 to five rounds of 38 Special.

If you want an LCP you can actually shoot well, this could be your baby. I'm happy with the regular LCP line -- but I do love these sights.