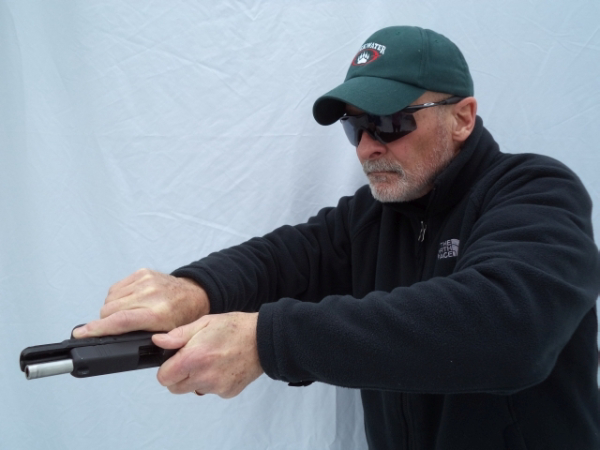 It is in one of the finest pieces of cinema ever produced (in my opinion) -- THE SHOOTIST (1976), where Ron Howard (Gillum) says to John Wayne (J.B. Books):

Gillum: "How did you get into so many fights and always come out on top? I nearly tied you shooting!"

Books: "Friend, there's nobody out there shooting back at you! It isn't always about being fast...or even accurate...that counts. It’s being willing! I found out early that most men, regardless of cause or need, aren't willing. They'll blink an eye or draw a breath before they pull the trigger...and I won't!"

I was still in the basic police academy when I saw this movie in an actual theatre. When I heard this exchange in the film, it hit me just like being slapped in the face. While it went right past most viewers, it stuck with me and I remembered it. When video (VCR) movies became available, I had a copy of that segment made at a shop that specialized in making VHS copies. I have used it continuously since becoming a firearms instructor in 1982. In the book THE SHOOTIST, the author goes into more detail during this exchange and if you can find a copy, I suggest you read it. If nothing else, it’s just a great novel.

Teaching shooting is not that difficult. All one needs is a foundational knowledge of the mechanics required and then recycle them to a student. Some are good at this; others cannot communicate the directions to the rest room, let alone proper technique. Many cannot perform the techniques they are teaching. That said, “instructors” do this all across the country every week and, for the most part, I am glad. Like Robert Heinlein, I believe an armed society is a polite society. If nothing else, it is certainly more stable, secure and safe. My concern comes in the quality of training many receive, but that is another story. 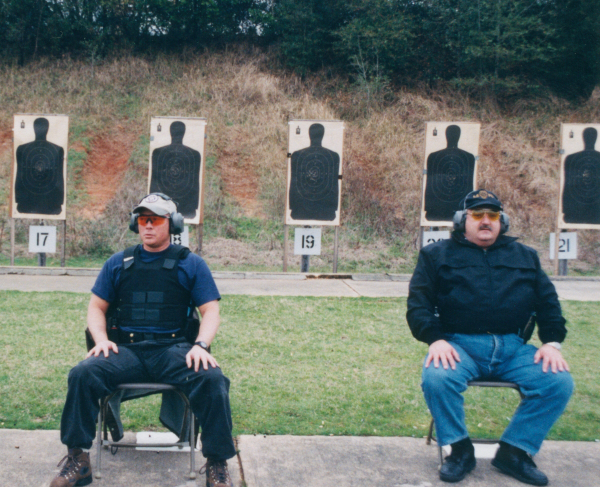 A part of bringing reality to "range world" included the "chair drill," something the editor first saw from world class instructor Clive Shepherd, then of NRA Law Enforcement. In this segment, participants begin the drill facing uprange, something that gave conventional LE range people the vapors. Below, the "downed/disabled officer" training (taken from Cirillo's work at FLETC), teaches another aspect to fighting. 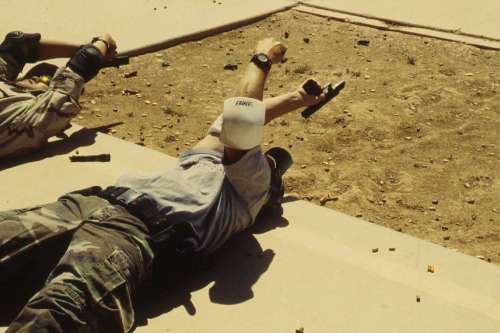 But shooting is not the problem, it’s teaching students to fight … to be combative … which is much more difficult as many instructors really do not comprehend the concept. Now, I am not bashing on our nation’s firearms instructors. Conflict should be avoided at all costs because every time one enters conflict, they run the risk of losing no matter how well trained. If an instructor does not understand the dynamics of conflict it’s easy to focus on splits, draw times, speed of reload and other skills that can be improved with practice. But does such skill make one better prepared to fight? Ahhh…is that not the million dollar question? Skill certainly makes one more confident, but does it make one more ruthless? As the author of THE SHOOTIST so clearly pointed out…and it has been borne out by history…the winner of a fight is not necessarily the person with the fastest draw, most bullets, super accurate, best gear…it’s the more ruthless of the two combatants…the one who will not hesitate to inflict harm on an opponent.

Every so often, someone will post photos of gang members or insurgents shooting their guns sideways and everyone laughs, jokes and ridicules the VERY dangerous people in these photos. This ridicule comes from people who, mostly, have never been in a fight. Forget that holding a handgun sideways and shooting does help control recoil, they seem to forget that most all of the people pictured are battle hardened and more than willing to cut their head off. They have likely been in multiple gunfights…no, they do not look as cool as many American shooters on the range, but they are very, very effective at what they do …. killing. 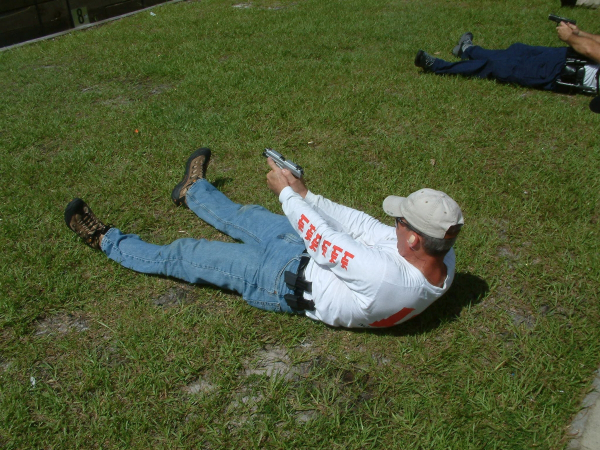 So, can we teach fighting? We can, but it is more difficult than teaching shooting…and it’s not near as much fun on a weekend. The skills of shooting and fighting are similar, but their application is different. How can you tell? Well, while not all inclusive, here are a few examples: If you are mostly concerned about your split times, draw speed, perfection on a particular drill or how you look when you do these things, you are probably shooting. If you are focusing on hitting the thoracic cavity multiple times every time you shoot regardless of the orientation of your body or how you look when doing so, you are probably fighting. If you are engaged in regular interactive training and not bitching, crying or making excuses for poor performance…just trying to get better each time…you are probably training for the fight.

Again, these are but a few examples, but I believe they show the difference in application.

Which are you doing?

Dave Spaulding is a professional firearms instructor with 36 years' experience in Law Enforcement and Federal Security. The recipient of the 2010 Law Enforcement Trainer of the Year Award from the International Law Enforcement Training and Educators Association (ILEETA), Dave has worked in all facets of law enforcement including communications, corrections, court security, patrol, evidence collection, training and investigations. He was a founding member of his agency’s SWAT Team and acted as its training officer for 8 years. He spent a year in an undercover capacity and was the commander of a multi-jurisdictional narcotics task , has been an adjunct instructor at the former Heckler & Koch International Training Division and the Tactical Defense Institute. In addition to his many published articles (over 1,400), Dave is the author of two acclaimed books, Defensive Living and Handgun Combatives. He is also featured in a series of training videos from PANTEAO PRODUCTIONS. He currently operates his own training company that focuses exclusively on “the combative application of the handgun” www.handguncombatives.com .