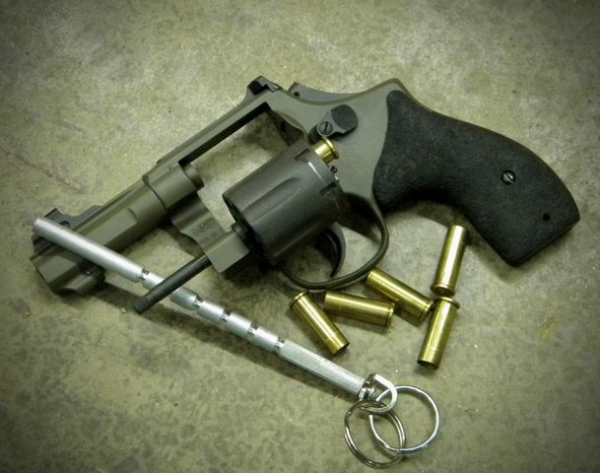 Revolvers are great for self-defense. That’s what I carry on a daily basis. They come in a variety of sizes, easily carried and concealed. There’s an assortment of effective calibers available – more today than ever. A well-maintained revolver will experience fewer malfunctions than the semi-auto. “Limp-wristing” won’t create a stoppage. You can fire with muzzle contact, common in close-quarters fighting, without worrying about pushing the slide out of battery or anything retarding the action of the slide. But, like any other piece of machinery, sometimes a malfunction occurs. Learning to fight with a revolver includes the skills to fix a stoppage.

The misconception about revolvers is that they are simple to shoot. “You just point it,” they say, “and pull the trigger.” The same can be said of most pistols today. Both revolvers and semi-autos require a degree of skill to use properly, safely and efficiently. The truth is, revolvers take more practice to become proficient than semi-autos.

Mastering the trigger on revolvers takes many hours of practice. With a semi-auto the trigger “press” requires four to six-pounds of pressure, and a short distance, except for double action semi-autos. The revolver trigger has a long “stroke,” much like pulling a paddle through the water. The trigger can be tuned down from heavy to around eight pounds. (The trigger can be lighter than this, say for competition, but it’s not advisable for a fighting pistol.). Resetting the revolver trigger also requires practice.

“Snubbie” revolvers have a reduced sight radius (the distance between front and rear sight). Obtaining a precise sight picture requires more discipline. With the revolver, all the recoil is felt in hand. The semi-auto uses a lot of recoil cycling the action. All things considered, revolvers require much more practice – after learning the proper techniques – than semi’s.

The learning starts by determining which hand you’ll hold the weapon in during manipulations. It can stay in the strong hand or, you transition it to the support hand. Either technique is acceptable. Deciding this will dictate how you’ll load, unload and reload and clear malfunctions.

Prevention is always the first step. Many malfunctions are operator induced; using proper techniques reduces this possibility. Stroking the trigger puts a lot of tight tolerance parts into motion. Keep them maintained and clean – much more critical with revolvers than semi-autos. Use quality ammo only. High or “blown” primers will cause problems. I’ve seen steel case ammo that allowed the bullets to slip forward from the case and bind the cylinder during firing. A “squib” load – not enough powder to clear cylinder/barrel – can be real danger for the shooter.

Even with prevention, stoppages do occur.

Even after learning the manual of arms for the revolver, it’s always best to have a “Plan B.” If a second trigger stroke doesn’t fix the problem your most efficient response is a “New York Reload,” transitioning to another weapon. (New York reloads apply to all types of firearm, regardless of the type of weapon you carry.)

After well over one-hundred years of service revolvers, are still excellent weapons for defensive use … if you’re willing to invest the time to actually learn how to use them. Even if you don’t plan to be a wheel-gunner, learn enough to use one in a ‘battlefield pickup’ scenario. Plus, revolvers are “more fun” to shoot than semi-autos. They’re very addictive.