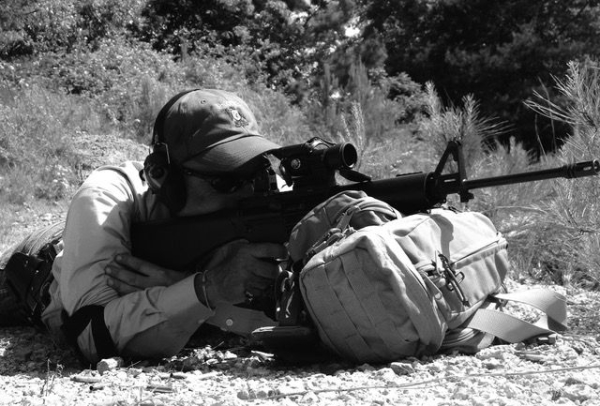 Follow-through is an important but often overlooked part of shooting. It consists of recovering from the recoil, reacquiring another sight picture and then resetting the trigger. This sequence does several things. First, for defensive work, it prepares you for shooting again. It’s also a critical component to surgical accuracy – long distance/small target shots. While learning to follow-through requires plenty of repetition, the reward is well worth the effort.

Firing a shot isn’t difficult – obtain a good sight picture, hold steady and press the trigger smoothly. Most people think that’s all there is to the shooting sequence but, it’s actually only half of the equation. The second part is follow-through.

Next, acquire another sight picture on target. Watching or seeing the front sight during the entire shot – before, during and after firing – is mandatory. This is much easier, and quicker, than focusing on the sight as you press, then shifting the eyes to target and having to shift focus again back to the front sight. The problem here is that we want to look and see where the hit is placed. Where that shot went isn’t important; concentrate on where you’re placing the next hit. The target – game or threat – will tell you when the shooting is done. Watch the sight during and after shooting.

The final step is resetting the trigger. If you’re forced to fire, getting the hits efficiently is critical. The key to efficiency is cutting out unnecessary, wasted motion. This applies to manipulating the trigger as well. Press the trigger smoothly. The shot fires. Release the trigger, but only to the point that the internals of the weapon reset. You’ll feel it “click.” At this point the trigger is ready to be pressed again – if required – to fire another shot. Slapping or jerking the trigger won’t give you good accuracy. Letting the finger come off the trigger post shot wastes time, and increases the chance that the next press will be a jerk or slap. Resetting the trigger also serves as a partial systems-check. When you don’t feel a trigger reset the weapon is telling you it needs to be reloaded, or there’s a stoppage that needs clearing.

The shot breaks. You recover from the recoil, acquire another sight picture and reset the trigger. At this point ask yourself, “Do I need to shoot again?” Remember, the “target” will answer this for you. If “yes,” you’re prepped and ready to get another hit. If “no,” come off the trigger, come off target – low-ready – engage any external safeties on the weapon and start scanning. For surgical shooting follow-through increases consistency from one shot to another, which translates into improved accuracy. Follow-through is mandatory for moving targets.

Those familiar with applying the proper follow-through are well familiar with its advantages. If you’re not in the habit of following through, now’s the time to start the reprogramming. It will require slowing down, consciously thinking about it and plenty of repetition. Eventually it becomes habit. Follow-through will ensure you get the proper results when firing.