On April 5, 2011, I ran a piece about the tac load. It seems that, for some, it remains controversial.

It should suffice to note that it’s an administrative task, sometimes occurring in the midst of an event – and that has a “tactical reason.” We’re trying to refill a gun that’s been fired in the instant during which no one is shooting at you. One asked how long you have to accomplish that task. While you shouldn’t dither, I imagine you have the rest of your life.

It’s superfluous for those who don’t carry spare ammunition – that could describe a large number of you. Similarly, if you face one person intent on your demise, reloading could be irrelevant. Normally we don’t know how many violent offenders there were until the game is over. (It’s not a smart plan to finish a fight with an empty or depleted firearm, unless you have extraordinary predictive skills.)

One question had to do with that “lull” in the fight. You don’t have to be a combat veteran to know of such things. There comes a time of uncertainty, movement, parts breakage, stoppages, disengagement etc. in many fights. Another had to do with how many practitioners were saved by use of the tac load in other than military engagements. So many non-mil, non-LE engagements involve the untrained and undertrained that you don’t have to be an MIT statistician to figure out such cases would be rare or practically non-existent.

Is that a reason not to prepare for it?

Recently at Gunsite, the tac load was presented to a mixed group of gun people and non-gun people. They started with using the procedure as we “make ready.” After the “load” component, we tac load to have a completely topped off pistol.

Double mag pouches were issued. Per my training, I always used the least accessible magazine for the tac load, saving the nearest magazine for those inconvenient emergencies. At no time during the trip did I put a magazine on the deck. During the shoot-off stage, I tac loaded after several engagements “just in case.” Another participant didn’t and had to drop out when he fired a miss and went to slide-lock.

The idea of the tac load is to keep a fully loaded firearm “just in case.” It seems like a good reason to practice the tac load – one of the easiest pieces of the repertoire to rehearse – if you’ll simply carry spare ammo.

As to whether we should tac load on the clock, I’m conflicted. There are those, told there is no clock on the event, who will move with diminished urgency. When faced with the real deal, some fumbling results. I prefer to think the tac load is best done with conviction: start out working piece by piece. If you’re on the Response Team or a street cop, practice with the tac load is an excellent way to work out your gear arrangement. When the fresh magazine is seated, take the split second for a light tug on the magazine floor-plate to ensure it’s locked in. 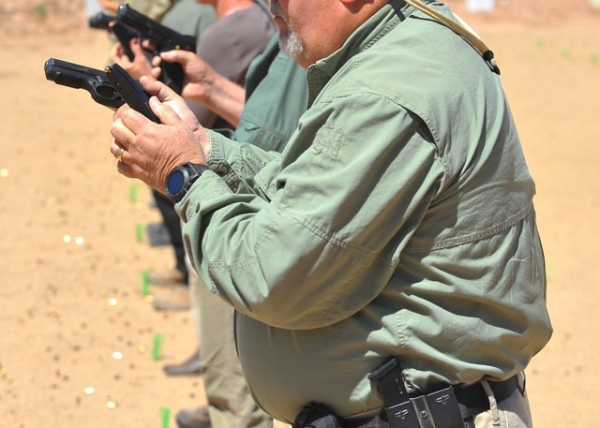 I found with the Ruger SR45s – these were new – it was best to load the ten-shot magazines to nine rounds to facilitate an in-battery load. Fully charged, it was a chore to get them seated. Not all guns are that way and a tac load is ideally suited to figuring that out.

I stowed the depleted magazine in the least accessible pouch – but still in the pouch, not a pocket. As there were only three magazines, I’d rather reach for the pouch (if needed) than to engage in the “ballistic Macarena” (coined by Mas Ayoob) – patting myself down for that last partly-loaded magazine.

If your hands are too small to handle two magazines at once, you may be carrying too big a gun for your hands. I find I can work with G21-size magazines but more positively with 1911 magazines.

If the tac load now has some appeal for you, perhaps you’ll start carrying a spare magazine or two – and that’s a good thing.

(The original story is HERE.)