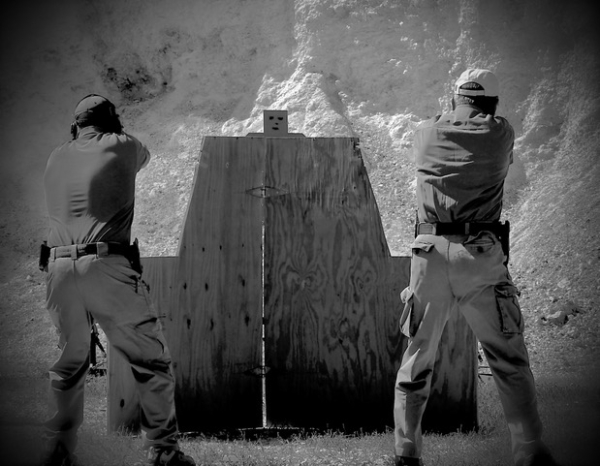 Your environment, depending on where you live, may have become a lot more dangerous in the last few months. (Here in Kirbytown, AL, not much has changed.). No one knows what the future will bring; even next week is hard to forecast. A large part of the population is full of doubt, frustrated and scared. They start the day with a stress level of eight or nine. It doesn’t take much to bump them to a ten, which is the point when even “normal” people start acting stupid or dangerous. In times like these, it’s important to remember that the fundamentals of defense never change. Being “prepared” means plenty of practice.

The fundamentals of responding to a threat are: Move, Communicate, using Cover, Shooting - if or as needed, and Thinking. Moving -- your immediate response -- should be done in conjunction with drawing your pistol. Now, think about your last practice session. Did it include these fundamentals? Or, was it a shooting session? If your practice isn’t based on the use of these fundamental skills you have to ask yourself, “Am I really preparing to use this weapon in a defensive situation?”

Practicing to move while drawing the pistol isn’t difficult -- even if you don’t have a live fire range that allows you to practice this. Keep in mind, the vast majority of your practice should be “dry.” With dummy firearms it’s easy to work on the basics without needing or having to go to the range. And, like I always preach, the return for your time and effort is much greater during dry work than live fire practice.

Moving in response to danger isn't natural; it goes against every natural instinct we have. So, it’s going to require plenty of practice to override the instinctual desire to root to the ground. Movement and drawing your weapon should occur together. Ideally, you want to get to the point where it feels awkward to stand still while drawing your weapon.

“But,” you ask, “what if the situation I face is an exception, and I don’t need to move?” When you get to the point where you’ve actually learned a skill – you can apply it on demand under any conditions – it’s actually easy to choose not to include that action in your response. But, it’s extremely difficult -- if not impossible -- to remember to do something that you haven’t learned.

The same is true for all the fundamentals. Communication, starting with issuing verbal commands to the threat, is another big fundamental. Communicating, “using your words,” doesn’t come natural under stress. You have to practice telling them, “Stop! Don’t come any closer!” – or words of similar meaning. Without practice you’ll get lock jaw under stress, at a time you need to be communicating. And again, if your particular situation doesn’t require you to issue verbal commands, it’s easy to choose to remain silent.

Make sure your practice includes the fundamentals. If not, then you’re really not preparing yourself to respond to a violent attack. Just going to the range and shooting a few groups is like “virtue signaling.” When it comes down to the actual application you’re going to come up short. Remember, dealing with violence is always a life and death situation. Self-defense is a serious subject, and should be approached accordingly. But, only you can make sure when it’s time, you’re truly prepared.