Chuck’s words resonated with me. You see, Chuck Haggard came into cop work in the 1980s and wisely worked himself into mentor/mentee relationships with cops like Vince O’Neill and Evan Marshall who had lived through one of the most volatile and violent times in the modern era. Those cops learned survival from war veterans who had taken up the badge upon their return home. War veterans of that time didn’t need training on such topics as counter-ambush techniques. They had lived through real-life events and passed those survival skills onto their police trainees.

In the 1960s and 1970s, ambushes against law enforcement were tragically commonplace. That didn’t change until law enforcement tactics and training did. The number of officers murdered in the line of duty peaked in the 1970s and 1980s and generally declined thereafter with the advent of advanced training and equipment. Equipment and technology have continued to evolve to this day, but we lost our way in the training arena somewhere.

A few decades later, after what has been unofficially dubbed, “The Officer Survival Movement,” of the 1980s, law enforcement seemed to relax on training in counter-ambush tactics. Today, that training is lost to most of us. Violence and lawlessness is cyclical and we must reach into the past now to re-learn those lessons. A few years ago, I started working on a piece about that very officer survival movement and counter-ambush tactics in particular. I reached out to Vince O’Neill, Oklahoma City PD (ret.), Evan Marshall, Detroit PD (ret.) and William Bell, USCBP (ret.). This is some of what I learned. I’ve omitted many specific tactics which I wouldn’t want in the public domain.

A solid ambush response begins before going to the call. Officers need to accept the fact that it can happen to them and have the mindset that every call is a potential ambush. A cop’s mind should be several steps or blocks ahead of their actual location as they travel to a call. Dr. William Aprill of Aprill Risk Consulting is a former law enforcement officer and practicing psychologist. In his Unthinkable program, he teaches us not to make “meaningless transitions.” An example of a transition would be exiting or entering a vehicle, going through a doorway, etc. Dr. Aprill teaches us to make those transitions while paying particular attention to our surroundings. This approach is easily applicable to ambush response. Evan Marshall told me officers in his department would often stop their vehicle on an approach to simply listen for a few seconds. A cop who knows his patrol zone should recognize what the neighborhood should sound like at various times of the day and night. Red flags should go up when approaching a residential neighborhood which is unusually quiet. People who live in a particular area for a long time know when something isn’t right and will tend to “get small,” when trouble is afoot. 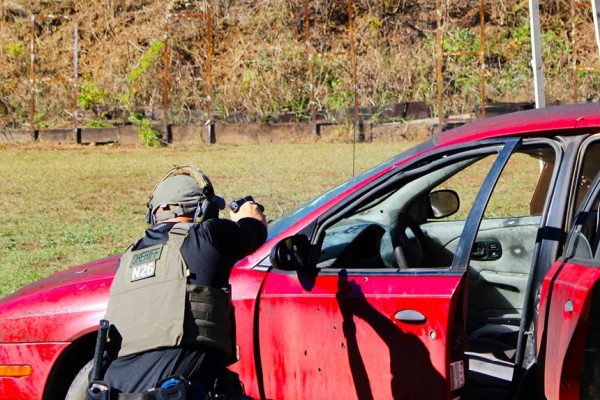 The kill zone is that area where an officer will receive fire from an ambush. It is the ‘X’ in, “get off the X!” Much like a doorway, we don’t want to dally in those areas. Cops must look at any given area as they would if they were the ones setting up the ambush. Where would you set up to fire from if you knew an officer would be responding to 100 N. Main St in your town?

In the Field, At the Station, At Home

In just the last few years, ambushes on law enforcement officers have happened on calls for service, at the station and even at their homes. The thought process must go with you everywhere. Some cops say they don’t want to be a cop 24/7/365 and that would be a stressful mindset. I disagree. Knowing that I’m paying attention to my surroundings and that I will have a say in my own survival should the worst happen gives me an element of peace.

The reason I wrote this article is because, somewhere along the line, departments stopped training for ambushes. In fact, almost all survival and combative training has taken a backseat to what an uninformed but influential element of the public believes law enforcement should be. That and other factors have caused a dangerous paradigm shift in the cop culture over the last few decades. What can be done about it? If your department doesn’t train for ambushes – and it’s likely they don’t - you have to train yourself. If you are somehow involved in training for your agency and you don’t have solid counter-ambush training as part of your regular program, add it.

Where to begin? There is solid information out there currently on ambush survival if one does his or her research. The IACP conducted a study of ambushes on law enforcement from 1990 to 2012 which showed a disturbing increase in ambush attacks between the 1990s and the first decade of the 21st century. The history of ambush attacks is a good place to start. The study also indicated that taking cover, wearing body armor and firing back substantially increased an officer’s chances of survival. This and “getting off the X” should also be included. Some other important points which should be focused on are pre-attack indicators, how to use vehicles for escape and cover, shooting on the move, engaging multiple targets, engaging moving targets and using distance to your advantage.

I hope this article isn’t good enough for you. I hope you go out and learn as much about this topic as you can. The best way to learn about ambushes and a proper response to them is to reach out to those cops who lived it. If we don’t capture that knowledge now, it will someday be gone and we’ll find ourselves trying to recreate the training. Keep in mind how many of our predecessors already paid the ultimate price for that knowledge. If we don’t secure and preserve it now by training ourselves and our people, we are destined to repeat one of the worst chapters in law enforcement history.

Warren Wilson is a lieutenant with the Enid Police Department in Oklahoma. He is a former SWAT team leader, current firearms instructor and writer. He has been a full-time law enforcement officer since 1996. Since 2012, he’s had over 100 articles published in Law and Order, Police Marksman, Modern Service Weapons, Operation Specific Training and is a columnist at Police One.