When thinking about “interpersonal conflict” …i.e. a gunfight…cops and armed citizens alike want to believe they know how the fight will start, finish and how their opponent will engage.

Always having a plan of attack is sound. But we all need to remember the fight will never progress according to plan so we all need to have contingencies. Boxing Champion Mike Tyson once said “Everyone has a plan until they get punched in the face” at which time everything goes sideways. Making assumptions will put you at a disadvantage before the fight ever begins...especially if the fight does not follow what YOU have planned for it.

Over the years I’ve taught many courses and, in these courses during conversation, students usually share their plan of attack (or counter attack) with me. This is true regardless of whether they are law enforcement, military or armed citizens. Most will say: “If someone kicks in my front door, I’m going to get my gun while my wife calls the cops.” Or, “If I roll on an active shooter call, I’ll clear my carbine from the rack before I arrive on the scene.” These plans will work fine provided the suspect(s) performs exactly as visualized in the student’s mind. The problem: We have no idea what any criminal will do. As I’ve said many times before, they don’t think like we do! 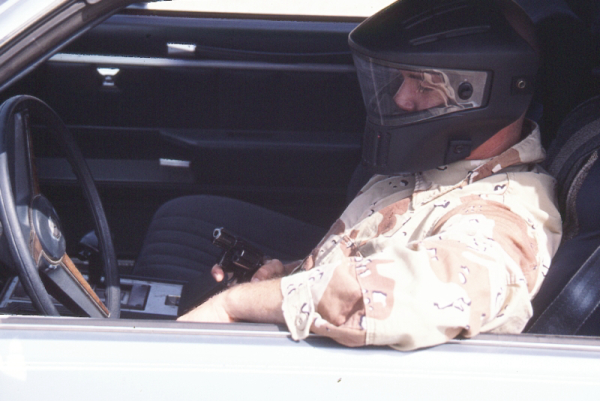 Trying to think like violent criminal offenders is tough. In this set-up to a police training exercise, the 'sims' armed 'offender' is simply replicating an event that's already happened in a car stop scenario. Below, firearms instructors in a simulation forcing them to engage live-fire targets after exposure to OC spray. 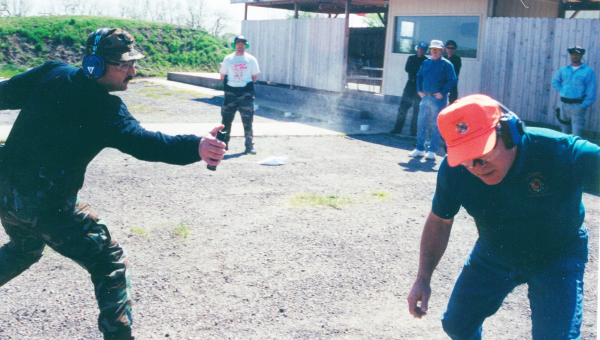 The truth: Good guys and gals don’t have the experience to “think” like the bad guys. Why? Simple…We haven’t had the same life experiences...we did not grow up the same way thus we do not see the world around us the same. This is a simple fact!

Sometimes I question the tactics and techniques developed during interactive training (Simunitions, UTM or Airsoft) because the people playing criminals are cops or legally armed citizens and they’ll behave in scenarios as such—not as a criminal would. You will do as you are trained and few have been trained to act illegally…you know, ruthlessly, selfishly, violently and with no controls. In the examples above, what if the suspect comes through the back door instead of the front? What if the officer wrecks his cruiser while responding because his attention was directed at the carbine? It’s been said many times before…no good plan survives first contact with the enemy.

It’s certainly important to “war game” any plan, but it’s also imperative to have several plans. When plan A doesn’t work (and it probably won’t), we move to plan B, and if that fails, plan C is instituted without hesitation. Yes, it’s a tall order, but it’s essential. Attempt to consider all the possible variables in conflict and then plan for the worst possible situation. That way, when things don’t go as planned (they won’t), you’re still prepared with other options.

Threats will always be situationally dependent...you know, circumstance dictates... and we need to embrace this reality. Practice the critical skills—movement, communication, accurate shooting, manipulation of the weapon, using cover and concealment, etc.—so that you can run on autopilot in any type of attack. If you have to "orient" to the situation, you might not respond at all. Doing so also prepares us for the unexpected, which is darn near guaranteed in any fight. Let me give you the secret to winning a gunfight: it’s the person who sees the situation for what it truly is FIRST, adapts accordingly by applying the required essential skills to the problem! Easier said than done...

Keep in mind there’s no such thing as a fair fight. The difference between competition and combat is rules. If there are rules governing what transpires, we call that a sport. But in a fight, if you aren’t cheating, you aren’t trying hard enough to win. Use every skill, tactic or technique you possess to your advantage.

Erich Hartmann, the Nazi Ace who killed 352 allied pilots during 1,000 combat missions, laid out the importance of surprise when he said, “The man who sees the other first already has half the victory!” You can’t fight what you can’t see or don’t know about. In reality, combat isn’t just about accurate shooting, movement, tactics or techniques. It’s about continuous problem solving under the duress of someone trying to kill you. It’s about one fast, crisis-level decision after another. 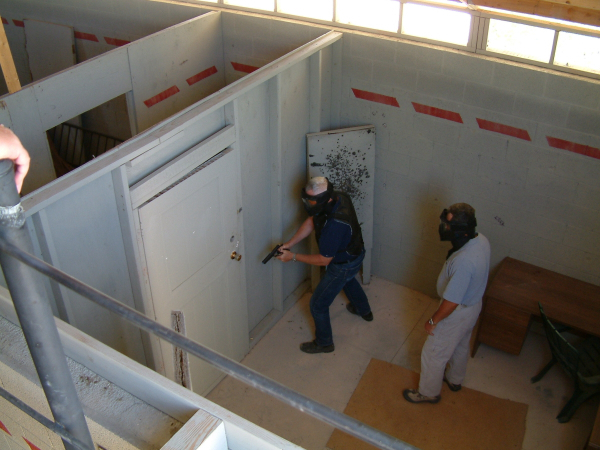 Just working corners and doors - essential skills for room combat - are made more complex by using guns fitted for marking cartridges only and having 'bad guy' role players.

• Which tactic or technique should I use?

• Are there non-hostiles in the area?

• Am I justified in shooting?

• Where are others in the battle space?

• Where is the suspect?

These decisions will arrive in rapid fire and the truth is you won’t move through “observe, orient, decide and act” as smoothly as water being poured from a pitcher. If you can’t see, then you might very well freeze in the orientation phase. Considering all of the information that’s pouring in and colliding with personal/normalcy bias, reluctance and disbelief, it’s a wonder orientation can occur at all! But it can and does for the truly prepared!

In the end, it’s not about how tight a group you can shoot, it’s about whether or not you can hold your “sierra” together during the most stressful event you’ll ever experience and take the actions needed to prevail—not just survive. A quote I’ve used many times sums it up: “Right now someone is training so that when they meet you, they beat you. Train hard and stay on guard.”

Dave Spaulding is a professional firearms instructor with 36 years' experience in Law Enforcement and Federal Security. The recipient of the 2010 Law Enforcement Trainer of the Year Award from the International Law Enforcement Training and Educators Association (ILEETA), Dave has worked in all facets of law enforcement including communications, corrections, court security, patrol, evidence collection, training and investigations. He was a founding member of his agency’s SWAT Team and acted as its training officer for 8 years. He spent a year in an undercover capacity and was the commander of a multi-jurisdictional narcotics task force, has been an adjunct instructor at the former Heckler & Koch International Training Division and the Tactical Defense Institute. In addition to his many published articles (over 1,400), Dave is the author of two acclaimed books, Defensive Living and Handgun Combatives. He is also featured in a series of training videos from PANTEAO PRODUCTIONS. He currently operates his own training company that focuses exclusively on “the combative application of the handgun” www.handguncombatives.com .