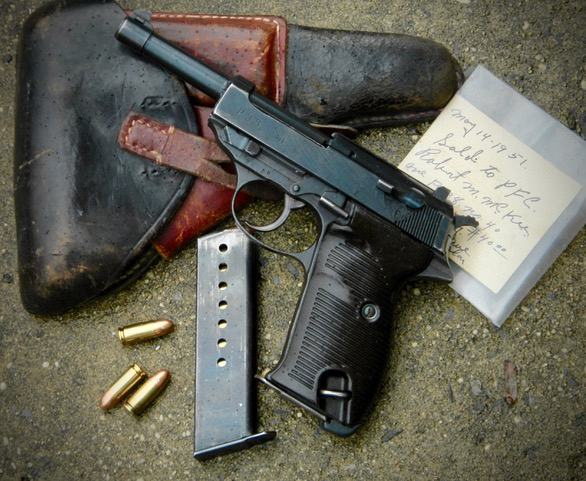 Every year about this time I go through my firearms and oil ‘em up. I pull them out of the safes, inspect and wipe down each one. This is an admin matter, ensuring nothing is dry and there’s no rusting occurring. It’s also an emotional event; every weapon has a story. This year the one that really connected was “my” Walther P.38.

The Walther 9mm P.38 was designed to replace the expensive and fragile Luger. It was adopted by the German army in 1938, with production from 1939 to 1945. It uses a single stack magazine, and was the first pistol to combine the locked breech design with a double/single action trigger. And, it has a loaded chamber indicator. Over a million P38s were built in Germany, and it found favor with many Allied troops too; there were a lot of “liberated” P.38’s “imported” by Allied troops.

My P.38 story starts with my maternal grandfather. After WWII he acquired a P.38 that was produced by Spreewerke in December of 1943. In 1951 my dad was heading to Korea and needed a pistol to carry. Gramps sold dad the P.38 for $40. (Amazingly the bill of sale survived - I have it too.) Since dad couldn’t carry to Korea my grandfather built a small tin box to shield it from x-ray – apparently this was a big thing - and shipped it overseas. Dad carried the P.38, then mailed it back to the states in the same box. Mom kept the box for keepsakes, and amazingly that’s survived with the postage markings still on it.

The P.38 is a pleasure to shoot – in single action. The double action trigger goes way past my scale’s ability to measure, but I’m going to say it’s like 18 pounds or more. It’s heavy. The sights are more like target sights, as all pistols were in those days and it shoots accurately. But, it’s definitely no fun to manipulate … like grabbling hold of a box of razor blades. In fact, this is one of those pistols you use a “sling shot” grip with the thumb and first finger to cycle the slide instead of the preferred “c-clamp” grip between the heel of the hand and finger tips. Using the “proper” technique is sure to result in the large and sharp de-cocking lever tearing a chunk of flesh out of your hand. No, I don’t shoot it very often, but then that’s not the point.

Firearms are more than just tools. They are handed down and passed from one person to another, always with a great story attached. Unlike most tools, there’s an emotional connection. For the P.38 it’s a generational string from grandfather through dad to me. This “gun” produces fond memories of the entire family spending time on the range, where truthfully there was more grilling, eating and stories told than actual shooting. Firearms are a way of connecting with those who came before us.

What’s the point of all this? When someone says they want to restrict your ability to own firearms, they’re not just taking away a valuable tool – which saves lives – they’re also filching your memories and history. Of course, I could just be full of nostalgia and over thinking all of this. But, since it won’t be long before the “youngsters” will be deciding what’s important it might be cheap insurance to help spread the word about how important firearms ownership is, and the many ways they enrich your life. After all, the best way to convince someone of something is to make an “emotional connection.”