Editor's Notebook: Care, Use of the "Hated Rifle" 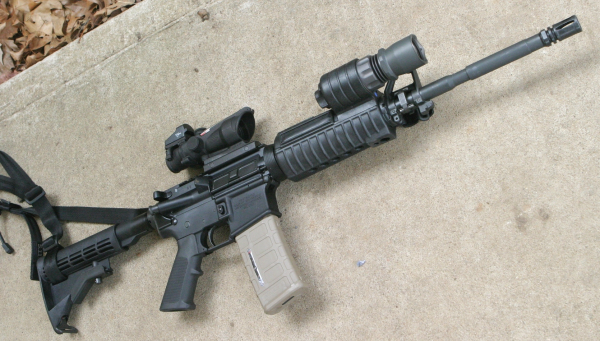 While national media, celebrities and political candidates tell us all about the horrors of the AR-15 – a gun known early in its history as a “poodle shooter” – the American gun-buying public still buy that basic design across an array of forms. Their purchases of accessories – optics, metallic sights, triggers, slings, furniture, add-ons – seems to continue unabated.

Some consider knowledge to be a dangerous thing. Others consider lack of knowledge to be the problem and there’s something to that. On the current bookshelf, I have “the” owner’s guide to this firearm – it’s on the “actual” bookshelf – and I have a user-guide to the AR, on the “digital bookshelf.” 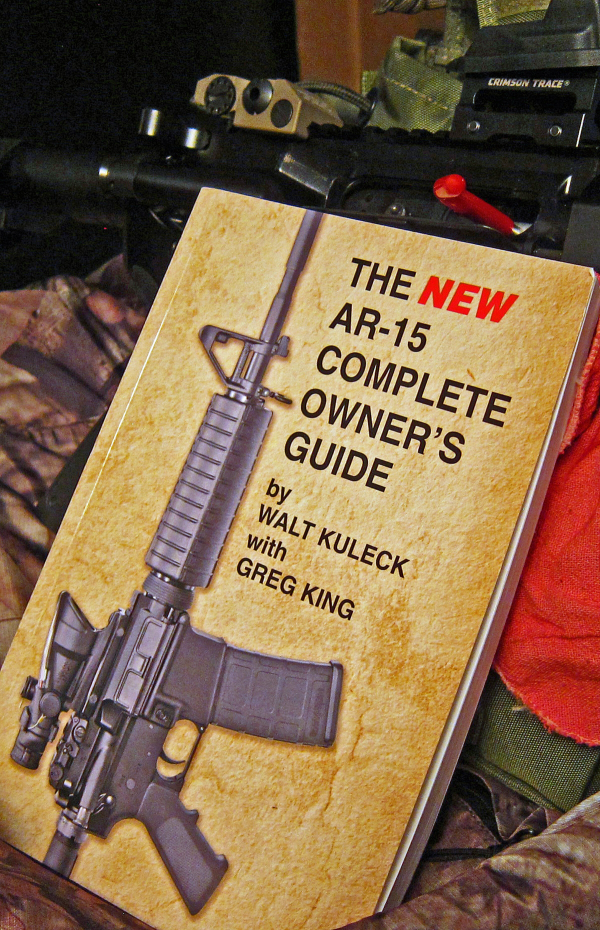 The book is an update meant to cover the ground after the federal gun ban sunset. While assembly and modularity was the key to the city when ownership of “deadly black rifles” (sic) were subject to such onerous regulation, now people have different guns for different needs. Along with the variation of purpose – personal and home defense, hunting (varmint, big game) and various target games (including 3-Gun, along with the “service” matches) – there became variations in caliber. These include everything from dedicated rimfire analogs to “big block” ARs for 7.62x51mm to straight-walled big bores to various “middle caliber” (e.g., 6.8 SPC).

If you want to know what the closest “government standard” carbine is that you can own, he mentions the Colt LE6920 – then tells why that is. He examines the “piston” guns and moves into accessories.

In the middle of the book, he discusses operation of the piece as well as maintenance. This alone is worth more than the cost of the book. Walt’s book sheds more light on the AR-15 than heat, a welcome change from the media-political driven hysteria that seemed to intensify recently . . . for some, non-conspiracy reason, I’m sure. 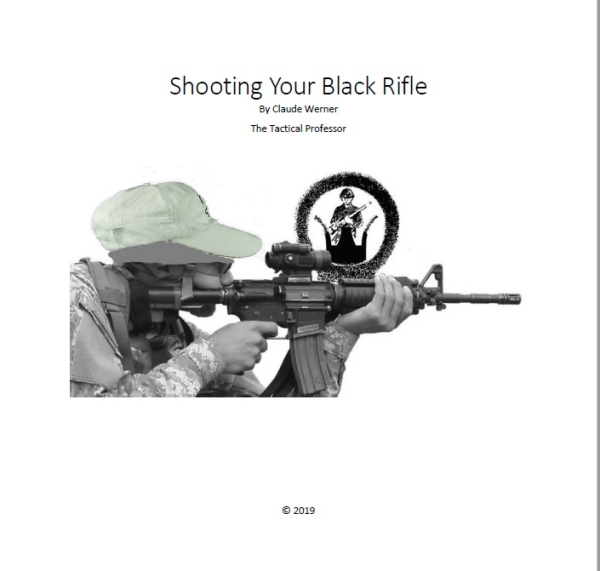 The digital book is from our own Tactical Professor, Claude Werner. The title is

Shooting Your Black Rifle (2019) and it’s a project he’s been working on for some time. It’s a basic shooting book, something that’s quite rare.

Claude begins with the essential issue, acquiring zero. Ensuring that your rounds go where you intend them to go is critical. He doesn’t complicate the matter – there is more information around on how to align the sighting instruments with the path of the projectile than there is shooting texts – and that includes the firearm’s owners’ manual. He selects the most practical zero distance for his audience, the armed defender. He explains why he selected the distance and he provides a printable target to zero the piece.

He then explores a range of rifle courses of fire. As police patrol rifle courses are principally shot at fifty yards and inside – and that those distances most greatly coincide with defense of homesteads, he selects those to encourage practice and evaluation of skills. These can include shooting from various positions, from behind barriers, reloading and stoppage clearance skills, as well as a level of marksmanship – all under some time constraints.

Claude provides his printable targets in reduced scale for those who have access to only 25 yards.

With the comprehensive course outlines, one can mix and match to meet specific needs as well. You need only block, copy and paste into a document from the various courses to come up with your own. Or you can have a witnessed/video recording of your attempt to pass a patrol rifle qual to put back to answer potential questions later.

He doesn’t stop with “paper punching.” Claude also provides decision-making and verbalization drills. It wouldn’t be a Tactical Professor production without the appropriate dry practice instruction; he tells how to set it up and complete dry practice safely. You can get a few hundred trigger presses per shot fired in dry practice – and the live fire practice will show the work you put in.

While he covers safety, “Serious Mistakes and Negative Outcomes” elsewhere, he also includes that discussion in this book. Those aren’t AR-15 issues; they’re gun ownership issues. You have to be smarter than the gun. “Life isn’t fair,” he says. “If you want a guarantee, buy a toaster.”

If you’re new to ownership of the AR-15, this is your “use” manual. Walt’s book will tell you about the nuts and bolts of the piece and Claude’s book is more about safety and effective rifle practice. Those who’ve had the AR-15 and maybe taken a class or two, this book will give you more skills drills to sharpen those acquired skills and to maintain your level of proficiency.

You’ve never had any training? Well, you can’t get it only from a book – or video – but this book lends structure to your learning process – and provides printable targets.

While you’re about it, every gun owner should be aware of the serious mistakes made by other gun owners – learn from the mistakes of others instead of making your own. Claude has that decision making issue covered too – here.

We’ll likely be chatting about that soon too.