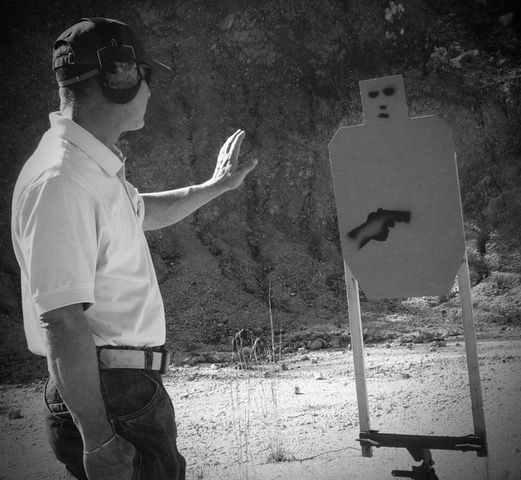 The fundamentals of responding to a threat are Move, Communicate, Use Cover, Shoot – if necessary – and Think, in order to solve the problem. Communication is number two on the list, and for good reason, especially when it comes to issuing verbal commands to the threat. In a majority of situations this will solve the problem. The threatening person complies, in which case you don’t have to shoot.

Communicating under stress is difficult. During team tactics courses we spend a lot of time focusing on communicating with the threat, partners, with bystanders and eventually responding law enforcement. But it all starts with issuing commands to the potential threat.

I like to start with, “Stop!” It’s concise, and most people in the world know what it means. If time permits, I can add additional instructions, such as, “Don’t move,” or “Leave now!” Keep in mind you’re not getting into a conversation. A lot of bad guys will ask questions in order to distract you. “Hey,” they explain, “I just need to ask you a question,” as they move in closer. “Stop,” you reply. One common issue I see teaching is students saying, “Hey, what are you doing?” Obviously, they’re up to no good, otherwise you wouldn’t be issuing commands. It’s essential to remember you’re telling them what to, demanding compliance.

Using a “command” tone - your “outside” voice - is mandatory. You have to let them know you’re serious, and if they don’t comply, they will face the consequences. It’s very critical that your body language is forceful too. Over ninety percent of our communication is nonverbal – body language. If your physical actions, movement and even your stance are not aggressive enough it won’t matter what’s coming out of your mouth. Body language displays intent, and bad guys are usually experts at picking up on nonverbal cues.

You begin issue commands as soon as feasible/necessary. I’d rather tell them what to do from thirty feet away as opposed to waiting till they’re right on me. Distance is time. The sooner you tell them what to do the earlier they comply. Or, the quicker you know it’s time to start ramping up your possible response, for example creating distance or moving to cover. You’re also already establishing for witnesses that you’re the “good guy,” and who’s the threat.

“But,” you ask, “when do I draw my pistol?” That’s the trillion-dollar question, one we all want to answer. It’s also one of those questions you can’t answer until that exact point in time. However, if you wait until you’re one hundred percent sure the weapon is needed, you’ve probably waited too long. Plus, your words carry a lot more weight when the pistol is in hand. The Low Ready position is ideal for this. The weapon is in hand, but not pointing at the threat. Safety Rule II – Never point the muzzle at anything you’re not willing or ready to shoot is still in effect.

Communicating under stress is difficult, especially if issuing commands isn’t part of your daily routine. Verbal instruction to a possible threat requires practice, and plenty of it. Next time you practice, start working communication into your drills.