One of the difficult fighting skills to teach is the art of moving. Second only to the ability to rapidly make decisions, footwork and moving are mandatory skills. At the top of the list for responding to danger is, “Move!” You move to avoid/escape danger, to take advantage of cover and the protection it provides or get a clear angle of fire to engage the threat. Moving forces the threat to respond to your actions, which equates to time to apply your next action. The difficulty lies in moving with control and stability, while someone is trying to kill you. 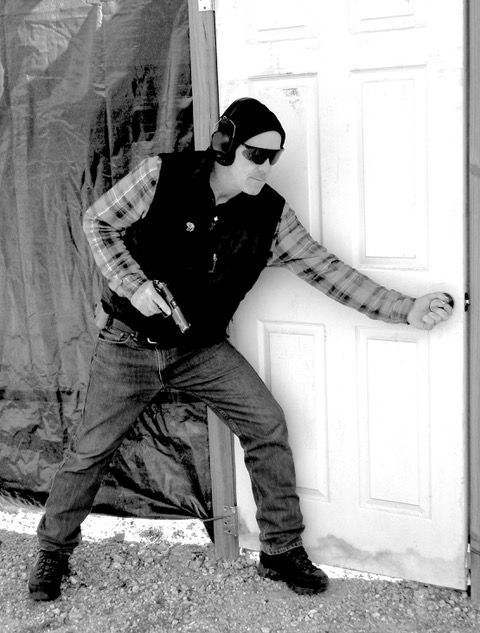 Our primitive responses to danger are submission, posturing, flight and flight. “Submission,” allowing the threat to perform their violent acts is not an option. Don’t sit on the floor in a line, meekly waiting for your turn to die. Sometimes “Posturing” can solve your problem. I’ve seen tiny chipmunks back down large cats. But when the threat decides to call your bluff and you’ve nothing to respond with it’s just another form of submission - it ain’t going to be pretty.

As mentioned above, “Flight” should be first on your list in response to danger. Move in order to avoid and escape to a location you can easily defend. Sometimes your only option to violence is to “Fight,” stopping the threat in the most efficient means possible. Both “flight” and “fight” require moving but it must be in a controlled fashion; you can’t fight efficiently without stability.

Everything flows from a “fighting” stance, as opposed to a “shooting” stance. For example, a common shooting stance has both feet parallel, as if standing on line in front of you. A fighting stance is similar to the way a boxer or martial artist stands. The same platform is used for fighting with firearms. The knees are slightly bent to lower your center of gravity, and allow you to reposition one foot without needing to shift all your weight to the opposite foot. Step first with the foot that’s closest to the direction you’re moving. Left foot first to move left. Right side first to move right. To move back step with your rearward foot first - right side for right-hand shooter. Then, the opposite foot is repositioned in order to reestablish your stance. One step means moving both feet; after taking one step you should end up in a fighting stance. Repeat as necessary.

Don’t get me wrong, there are times that “haulin’ ass,” putting as much ground between you and danger is the best response. But for fighting controlled, stable movement is required. “The essence of fighting,” according to Bruce Lee, “is the art of moving.” Since no teacher is going to bless you with these movement techniques you’re going to have to practice. Your firearms practice, both “dry” and “live-fire” should include movement. The goal is to cultivate “movement” as an immediate response to danger.