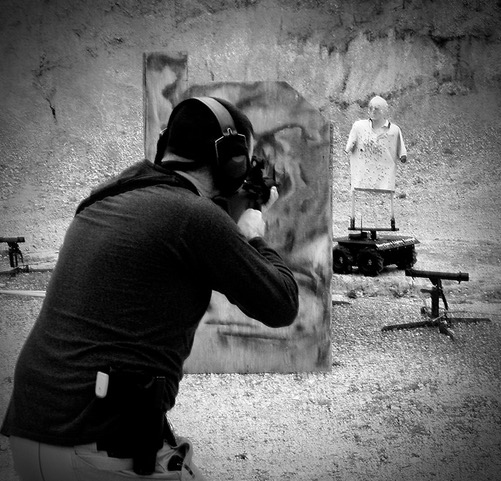 Success in a fight depends on movement, communication, shooting as necessary and, thinking -- and whenever possible using cover. We use cover for the protection it offers, regardless of the weapon the attacker is armed with. Cover creates a physical barrier between you, the threat, and their weapon, and is relative to what type weapon the threat is using. As with most of our defensive skills, there’s little about using cover that’s “natural” or “instinctual.”

An attacker armed with a knife charges. Putting a large physical object like a car between you and him diminishes the effectiveness of that weapon. The same would apply if they’re using an impact weapon or using their hands.

Using cover for protection against a threat armed with a firearm is a more subjective concept. Cover is relative to what type rounds they’re sending. Something that protects against handgun rounds might not hold up well against high-velocity rifle rounds. (And, doesn’t take that many pistol rounds to penetrate a concrete block.). With rifle rounds there’s a significant difference in penetration. A round of 5.56mm ball ammunition penetrates about 1.5 inches of concrete. The Russian 7.62x39 will punch through five times that much. Most objects in our environments offer a certain degree of protection; they are bullet resistant rather than bullet proof.

One of the major principles for using cover is to create distance between you and the objects used for protection. Distance greatly reduces the danger of being injured by fragmentation and debris created by rounds hitting that surface. Distance from cover lets you to see more of the threat environment. You’re driving down the interstate and get very close to the back of a semi-truck. All you can see is truck. Back away, create some distance and now you to see what’s going on in the lanes next to the truck. Plus, the more distance between you and cover the farther away from the threat.

There are some situations where you can’t create distance. The threat may be elevated, which means you’ll have to get closer to cover for it to provide protection. Or, there may be multiple threats, which changes the geometry completely.

When possible work around the side of an object, using vertical angles as opposed to working over the top of an object, which exposes more of your head to the threat. Try to remain standing so you can move and reposition as the fight unfolds. When a lower position is necessary we want to use positions that are quick to get into, and quick to get up and mobile as necessary. “Reactive positions,” such as variations of the kneeling positions, are quick to assume and, equally important, quick to get up and out of. The majority of violent confrontations occur in low-light environments so make sure your training and practice with cover should include low-light sessions, learning how to work with a weapon mounted, and/or handheld light.

Properly using cover, like all aspects of personal combat, demands plenty of practice. You can use a dummy weapon, and practice at home using walls and furniture as “cover.” It also requires you to pay attention to your environment. As you watch people around you – looking for questionable behavior, you’re studying to determine where your cover is. Then, if something happens you already know where you are going. As always, having a plan, backed up with plenty of practice, is the way to win the fight.