As we were closing rapidly on the onset of 2022 – likely an echo of the previous two years – I took the opportunity to do a short phone interview with industry insider (-- the original), writer-instructor-expert witness Massad Ayoob. 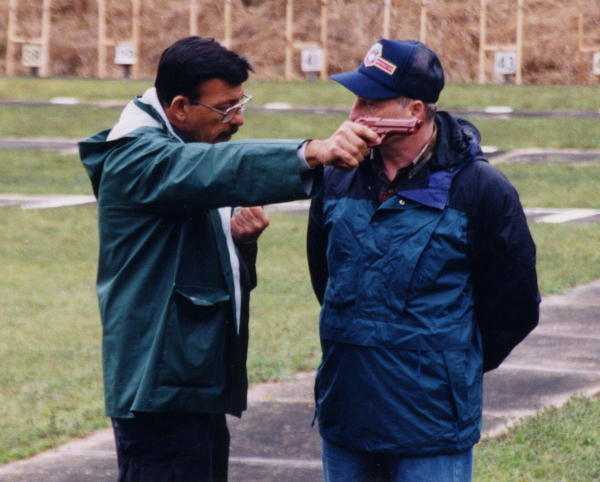 Mas doing a demonstration with a dummy gun in answer to a question from a seminar participant at an international trainers' conference, ca. 1998.

As we’ve been acquainted for around 27 years – and he’s quite approachable anyway – it was easily accomplished. Moreover, he’s been instructing through the recent unpleasantness as well as prepping for the onslaught of personal protection trials that have been pending throughout the pandemic.

Instead of question-answer, I elected to document our discussion more like a report. Speaking as old friends, it was less interview and more dialogue.

As to the big market in commercial firearms, the trend he’s seeing is the same as everyone is seeing: micro-compact 9mm pistols are leading the pack. As to revolvers, he’s seeing a “small” rebound. The interest seems to be from both extremes, both ends of the bell curve; the real pros appreciate the DA trigger and the form of the piece. Newer, less-experienced types are drawn to the simplicity of the six-shooter in use, loading, and unloading. 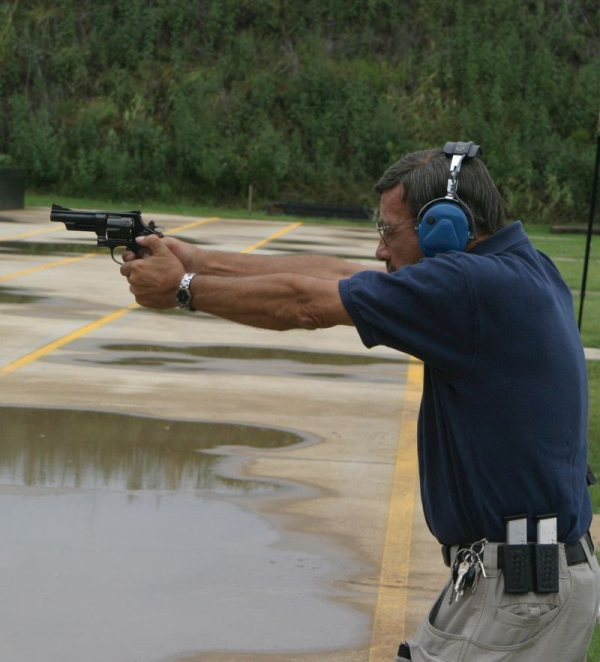 More companies are bringing out revolvers. A notable player in the field is the return of Colt to the DA revolver-making world. He’s shot the Python, Anaconda, various Cobras – though he wishes they’d not used the “Cobra” moniker for the smaller revolver. The smaller of the Colt wheelguns have appropriately large trigger guards; for people who operate in four-season environments, the large trigger guard is an unquestioned advantage for the gloved shooter. He’s tried them with his cold-weather gloves and there’s room in the trigger guard.

As to ammo, development continues. The ‘fluted bullets’ touted as replacements for jacketed hollow-points were tested in slaughterhouse experiments and seemed to leave wound profiles similar to premium hollow-points – though the cost of the new designs may preclude their acceptance over more conventional HPs. The possibility of confusing the ‘deep penetrator’ or “bear loads” versions with self-defense loads could create a potential problem in the defense use context.

I asked about the North Hollywood/Burlington Coat Factory OIS of LAPD. Without more details, little is really known. The officer used a rifle – the call came out as an active killer situation – and that’s a “long gun” call for service. Did the offender fall faster than the officer could stop shooting …? Who knows?

The issue of shooting faster than you can assess the environment is serious – but this may not be the situation in the present case.

As to the Kim Potter trial, it appears that one charge, the more serious, would logically preclude conviction on the second – less serious – charge. That’s a matter for appellate lawyers and, at the time of the discussion, it’s unknown if there will be an appeal.

As to my comment that “justifiability is reserved for intentional acts” – a quote from a class I took from Mas – he replied that it’s not justifiable but it could be excusable. In the text Warren on Homicide, it’s said that if the event is an accident that any reasonable person could honestly and unknowingly make and death results, the act could be excused. Mas noted that her grip on the pistol (as seen in video) was low, potentially indicating that, in her mind, she was using the electronic device. Her words reflected that presumption.

The problem is that the pistol is a reflexive device. You’d expect that you would reach for the gun without conscious deliberation when facing an actively resisting suspect who is known to you as a violent offender. If you trained at all, the draw of the pistol would be at the level of automaticity.

The Taser – and other nonlethal options – aren’t immediate response options. They belong in the deliberately used, plotted and planned-for situation where there’s time to get others clear and to shout a warning.

As we were discussing criminal cases – and considering civil liability, I asked about “insurance” for concealed carry practitioners. 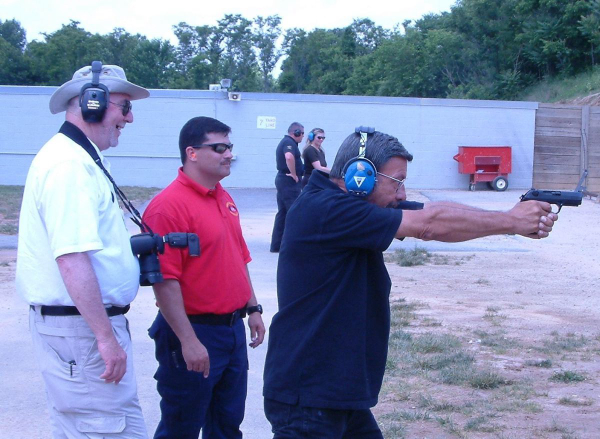 Ayoob is seemingly being supervised by colleague Walt Rauch at the media roll-out of the Beretta PX4 pistol.

It seems that these plans often aren’t “insurance” at all. The trend to support people in legal troubles over personal protection started with the Armed Citizens Legal Defense Network, an organization with which Ayoob is affiliated. With some 25 cases resolved, one having been tried, the “defense fund” concept is proven. As opposed to simply indemnifying victims of political prosecutors or over-zealous plaintiffs’ counsel, having financial backing seems to provide a deterrent effect.

In the short time after a self-defense incident, it’s not rare that prosecutors will over-charge the victim of the crime, a potential defendant. If that person has limited financial resources, the prosecutor can “make a name” or fulfill the wishes of the large-money leftist campaign finance donors by prosecuting a citizen who was faced with near-extinction by the act of criminal perpetrators.

The less than scrupulous prosecutor can also over-charge as a tool to get a plea bargain for a lesser offense; that’s a ‘win’ in the column of wins and losses – a factor sometimes used to get reelected.

When the prosecutor finds out – as he or she will – that you’re backed up by a group’s financial support, it gives them a reason to find something else to do. This is a force multiplier when they discover that you can fight them without facing bankruptcy.

I moved to the training situation with the following question: “With the retirement of Ken Hackathorn, Dave Spaulding – and now, Marty Hayes, are you considering “pulling the pin?””

“I have no retirement plans. When I was asked what I’d do if I didn’t have to work, I said … we’d travel around the country, seeing old friends and making new friends – and, once in a while, I might take an expert witness case – for a friend who needed me. Then, I realized I’m already doing that. I’ve been “retired” my whole career!”

He expects to refer more expert witness cases as that part of the business has been compressed in time due to the pandemic -- and as he has three trials over this month alone.

“What are you seeing in your classes, gear-wise?”

He said that he’s seeing more carry optics coming onto the line. All the guns – or nearly all – are polymer-framed. In one class, the only all-metal gun on the range was the one he carried. Nearly all the students’ guns are in 9mm. There are a few 45s or 40 caliber guns on occasion.

“What about new gun owners?”

“All our students arrive with some competence. They know basic gun safety when they arrive. Before the end of class, I tell them – even if you never intend to be hired or “hang out a shingle,” you’ll become the “expert” and the “instructor” for family, friends, associates who are new to the reality of being gun owners. You need to share safety and gun handling lessons with them.”

It seems simple these days to get “educated” on the internet – But BS abounds.

“The comments seen on social media can be depressing.” (I noted that information is easy to find now, it’s just vetting the sources and determining if there’s “gold dust amongst the chicken feed.”

I asked about new gun owners – are they shooters? Or is it just like the time of our youth, when someone would buy a gun and a box of ammo, shoot the gun a cylinder-full (remember, we’re old) and put gun and depleted box of ammo in the sock drawer?

“Those who’d buy the gun, consider themselves protected and forget it – those who see the gun as a talisman – will always be with us.”

“What can we expect to see in terms of prosecutions?”

He noted that the elected prosecutors who are backed by money from lefty-billionaires are driving political prosecutions up. Similarly, those legal practitioners seeking a “seven-figure” payday in civil litigation are driving the lawsuits trend upwards.

Jurors are fearful, he said, afraid that their decision will “cause riots.”

“What about guns generally?”

“The Springfield Armory SA-35 is nice to see. I’ve been exposed to three of them, one I bought. They are the “best Hi Power” of any since the custom-BHPs of Nighthawk Custom. They shoot to the sights, are reliable, have a positive thumb safety at a low price. At around $700 MSRP, they’re the best value of 2021. Ten years ago, the gun and custom work bringing it up to the Springfield Armory gun’s standards would have set you back $1500.”

“We have MAG classes all over the country, from California to New Hampshire.”

I recommend you get into one of his classes sooner rather than later – see his schedule here.