Editor’s note: We’re running this feature in two parts as Dave covers a lot of ground.

Many years ago, while engaged in a private conversation in his home, the late Lt. Col. Jeff Cooper told me, the three primary features required when selecting a combat pistol were “reliability, high visibility sights and a good trigger”. Hard to dispute these and I consider them ironclad, but today I would add fit. The number of pistol models has grown considerably over the years and the gun must fit your hand if you are going to shoot to your potential. 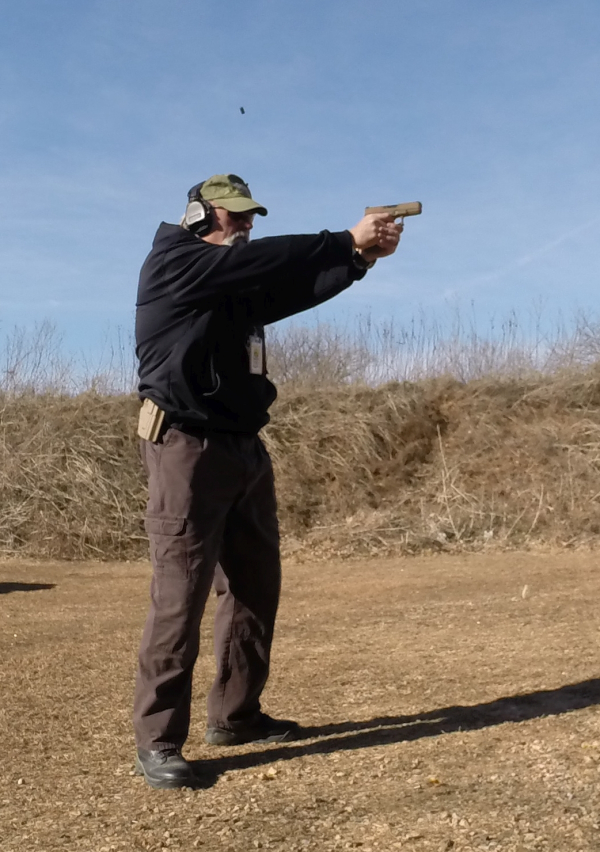 Today, a pistol made by a reputable manufacturer will probably be as reliable as human design and engineering can allow. Yes, individual models might be problems, but these lone samples should not reflect on the model line in its totality. In my classes, which occur most every weekend and have between 12 and 16 students, 70 % of the guns are Glocks. Seldom do I see a problem with a Glock, even the ones that have been (in some cases highly) customized. When I do see Glock problems, it is usually due to weak springs used in an attempt to make the trigger "better". The next 20% of guns seen at class are between the Smith & Wesson M&P or SIG 320 divided evenly, with the remaining 10% a smattering of all other pistols...1911's and HK VP-9's for the most part. All of these guns are "reliable" and run well. 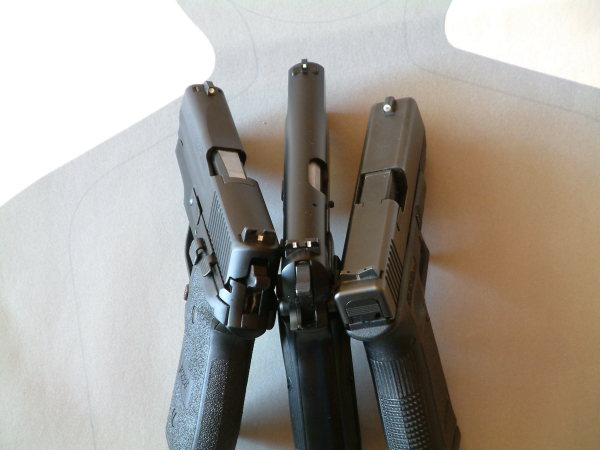 High visibility sights would be the next requirement and this would be up to the shooter. While I was recently criticized by a high profile instructor for saying "buy the sights you like" (he feels a good instructor can teach you to shoot with any sights which has some validity, but selecting what you like is certainly a plus as is confidence in anything. In reality, he was just stirring up controversy where there was none), I stand by this statement/belief. I like my Ameriglo CAP Sights, which offers a square in a square with a bright colored front sight, while others prefer thin black on black sights like those designed by Kyle Defoor. 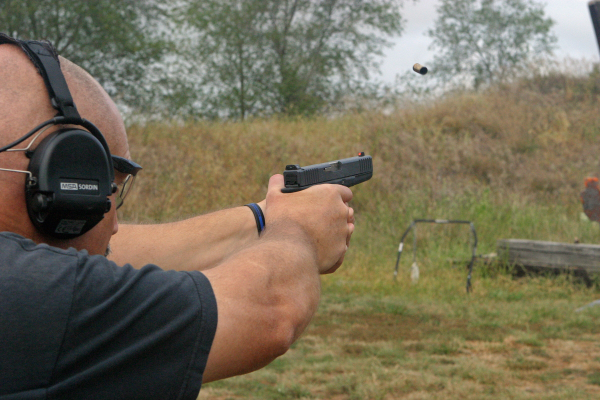 The Ameriglo Hackathorn Sight and the Trijicon High Visibility sight are quite popular and for good reason...they work! I have seen many students do good work with the XS Big and Small dot sights...I really don't care as long as you can hit what you are shooting at from contact distance to 25 yards. Being able to truly SEE the sights is also a big plus! 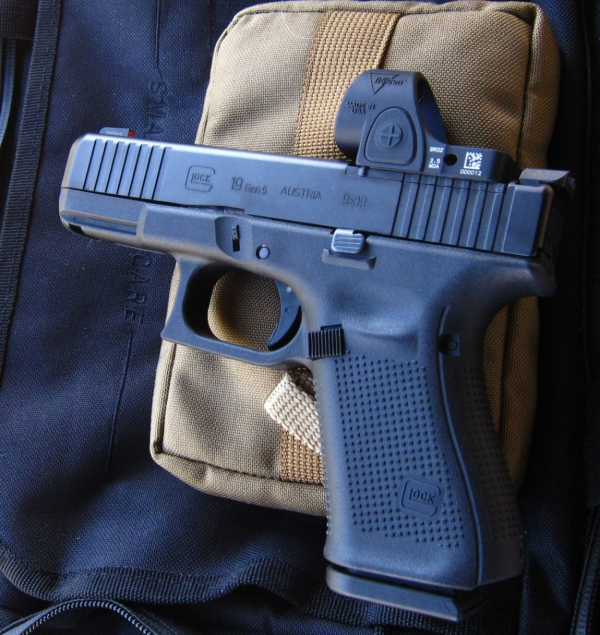 The current popularity of Mini Red Dot Sights (MRDS) for pistols has added another choice to the process of selecting sights for your combat pistol. While I do not believe they are the “end all be all” of combat sights, they can be a good choice for some. Expect to spend time working with them…say 1,000 rounds or so…as like all things, there is a learning curve. The great thing...in case you missed it...is there are a large number of sight configurations to choose from so do your homework and choose wisely.

A "good trigger”. This is where many become confused, as a good trigger is not the same as a light trigger. A good trigger is one that can be depressed smoothly to the rear without glitches, snags and catches in the action. Having a smooth trigger helps keep the hand from sympathetically clenching when trying to depress the trigger, which will take the muzzle off target. It’s called “late grip effect”. Keep in mind 1/16th inch of muzzle movement is 4 inches at 20 feet, so the importance of reducing this effect cannot be understated. In the end having a smooth trigger is critical! Please remember the hand works as a team, with four fingers opposing a thumb, while the thumb and index finger are also “hard wired” to work together. Isolation of the index finger is certainly possible, but is difficult to do when you ask it to apply pressure individually…the rest of the fingers WILL want to help! Compression of the pinky finger can really move the muzzle…remember the pistol is a lever and what is done at one end will move the other. 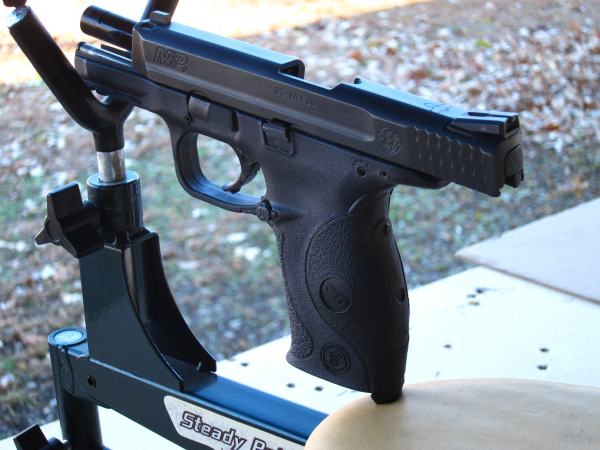 When I was still carrying a revolver on duty, it was quite common to have an action job performed, as most revolver actions were atrocious from the factory. Consider all of the moving parts that engage and interact in a revolver…to cock the hammer and rotate the cylinder…most revolver triggers felt like one snag or catch after another! A good action job did not lighten the trigger, it smoothed out all of the engagement surfaces so the trigger could be “rolled” to the rear without taking the muzzle off target. Revolver actions that were nothing more than “clipping coils” off the hammer spring resulted in an unreliable weapon, which violates the first requirement listed here. Not good…

Pistol actions should seek the same end result…a smooth depressing to the rear, not a light trigger. The popular Glock has the famous “catch” in the trigger action that occurs when the tail end of the trigger bar engages the connector shelf, which pulls the trigger bar down to release the striker. If you think about it, the Glock is just a big slingshot…pull back, let go! Sure wish I had thought of it…this simplicity is what makes it so popular…

The 3.5 connector was created to offer a less severe angle to this shelf to help reduce this glitch or catch, but it also lightens the overall trigger weight which concerns some. Trigger weight can easily be added by increasing the weight or the trigger and striker springs. In addition, polishing the engagement surfaces of the internal parts on a Glock can smooth the action but make sure you don’t round the edges, which can make the gun unreliable. Sharp edges of the trigger components are required to properly engage one another and perform their function(s). When in doubt, let a qualified gunsmith do the job.

(Part II finishes with triggers and moves into “fit” as a part of handgun selection.)

Dave Spaulding is a professional firearms instructor with 36 years' experience in Law Enforcement and Federal Security. The recipient of the 2010 Law Enforcement Trainer of the Year Award from the International Law Enforcement Training and Educators Association (ILEETA), Dave has worked in all facets of law enforcement including communications, corrections, court security, patrol, evidence collection, training and investigations. He was a founding member of his agency’s SWAT Team and acted as its training officer for 8 years. He spent a year in an undercover capacity and was the commander of a multi-jurisdictional narcotics task force , has been an adjunct instructor at the former Heckler & Koch International Training Division and the Tactical Defense Institute. In addition to his many published articles (over 1,400), Dave is the author of two acclaimed books, Defensive Living and Handgun Combatives. He is also featured in a series of training videos from PANTEAO PRODUCTIONS. He currently operates his own training company that focuses exclusively on “the combative application of the handgun” www.handguncombatives.com .