Stop. Freeze right there, and think about what you need to do. There are several reasons a weapon might be dropped, and just as many why you’d need to retrieve it. But, you can’t be all willy-nilly about it. Like anything else to do with firearms there’s a proper, safe technique to use.

You know you’re about to lose control of the weapon; it’s the moment you realize there’s nothing you can do to prevent this. There’s going to be a “crash,” but it needs to be a controlled wreck. First, let it drop- do not try to catch it. With modern firearms, there’s no danger of your weapon firing from being dropped. Weapons are “drop” tested from different heights onto concrete. They’re dropped onto the barrel, rear of the grip, on the hammer and other locations.

There’s only two ways a quality, well-made, modern design firearm – “modern” meaning 20th century or later, including double action revolvers. You try to catch it and one of your fingers/thumbs will end up inside the trigger guard . . . usually with the barrel pointing at your head. Or, you’ve had the weapon modified to the point that it’s unsafe; the wrong bump fires a round. Either way, the resulting negligent shot is dangerous.

The weapon drops, bounces once or twice and comes to a stop. Glance down to see how it’s oriented. Which direction is the muzzle pointing? Is it laying left or right-side up? Remember, this is a lethal weapon, not a hammer. When you actually pick it up, you need to do so using a proper firing grip. The firearm’s position tells you what to do so you can recover it with the correct grip. 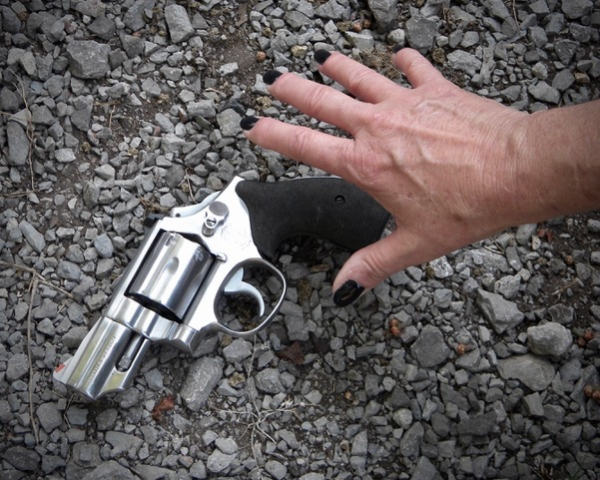 First, orient the muzzle to the safest available direction without touching the trigger.

Keep your head and eyes up. During group training/practice there are lots of safety issues to consider. Immediately jumping forward of the line to grab the weapon could end up with you in front of a bunch of muzzles. Don’t do anything until making sure it’s safe. This may require calling a cease fire, and/or getting the approval of the instructor.

In a defensive situation it’s mandatory to keep your eyes up. The threat is why you had to draw the pistol; that’s what you need keep watching. The threat will be moving. If you’re not tracking them you can’t react appropriately. Yes, you’ll have to glance down to locate the weapon and determine its lie, but then immediately get your eyes back on the danger. 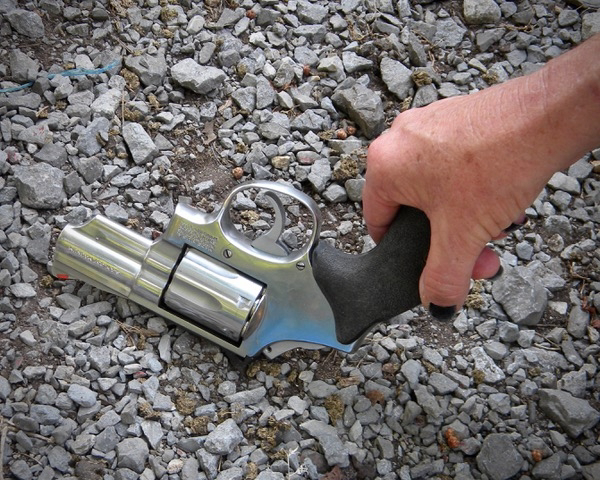 You're orienting the muzzle away from you and getting the gun into position to get a firing grip on it -- picking it up by the barrel or trigger guard is a NO-GO. 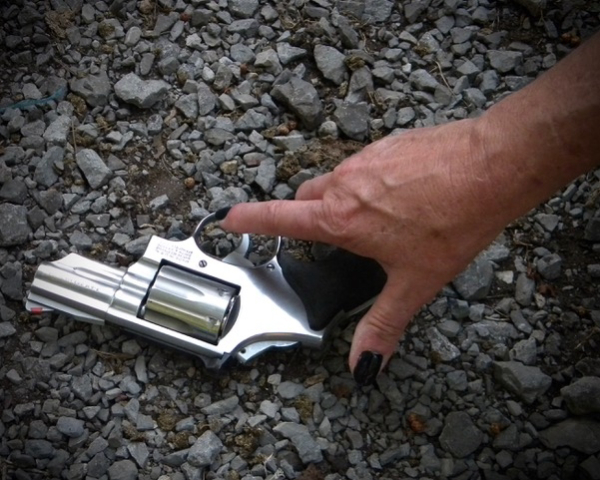 During close engagements weapons get knocked out of the hands. You’re injured in one hand or arm, and lose control. Maybe, the draw or presentation was hurried and the handgun ended up on the ground. There are a couple of options. When any handgun stops working – in this case it’s not working because it’s not in hand – the “New York Reload,” drawing another weapon is the quickest way to get back into the fight. Or, it may be necessary to recover the weapon on the ground. Either way, you’re going to need practice, and plenty of it, in advance. As always, the best way to practice is – say it with me – “Dry Practice!”