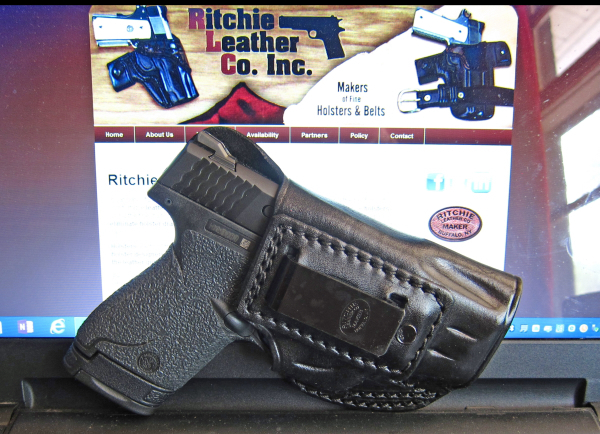 As we age, we become subject to medical issues – happens to all of us. Considering the likelihood, I elected to prepare by getting gear aligned for probable frequent trips into those ‘non-permissive environments.’ For me, that’s not places where carry of defense gear is legally proscribed; it’s carry into venues where discovery would derail the reason I was there with nonsense from the unenlightened.

The service subcompact I elected to go with was the one I have most hours and the most miles on, the S&W M&P9 Shield. The samples are of the original version, not the “M2.” The latest is the “retail Shield” of 2017. Stock as a stove except for Talon Grip material around the gripping portion of the frame, I snagged this from the retail pipeline when they were deeply discounted to determine the quality consumers were getting.

I’m still working on that part of it. It’s been shot a great deal and carried as much as the early model Shield I had for many years. It still seems to be running just fine.

The other example of the Shield was an earlier production model, this being changed with Apex trigger and Ameriglo CAP sights – designed by Dave Spaulding of Handgun Combatives.

So in advance of a potential medical situation, the guns and I made a trip to the range. I shot the ammo I’d carried in the retail Shield – Hornady American Gunner 115 XTP. Before you ask why, the response is “it’s what I had.” Too often the “perfect” is the enemy of the “perfectly adequate.” The holster I used, great for close concealment, was the Ritchie Nighthawk IWB worn under a clingy BLACKHAWK! shirt. I first attempted the Wizard drill and was 2.7 seconds on the 10 yard pair, down one on a head shot. While that’s a ‘fail,’ it was fired cold and the hits were otherwise timely and good.

How to practice: first I test to see what’s lacking. In this case, the 10-yard pair was the failure point. As the accuracy was good enough, it was time that was lacking. Looking at the timer, it was taking well over two seconds for the first hit from the holster. Instead of dwelling on the splits – we’ll see if that’s the issue as we proceed – let’s work on the speed to the first hit. 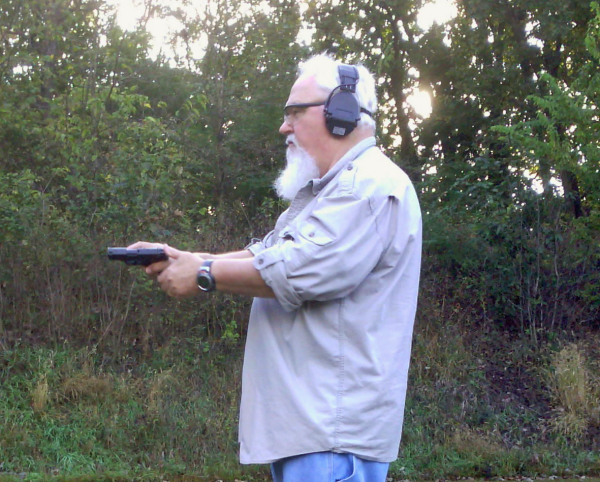 Above, live fire practice is critical, but dry practice is more often available. Below, the Shields are pretty happy with 115 grain ammo, this fired with Black Hills ammo from fifty yards. 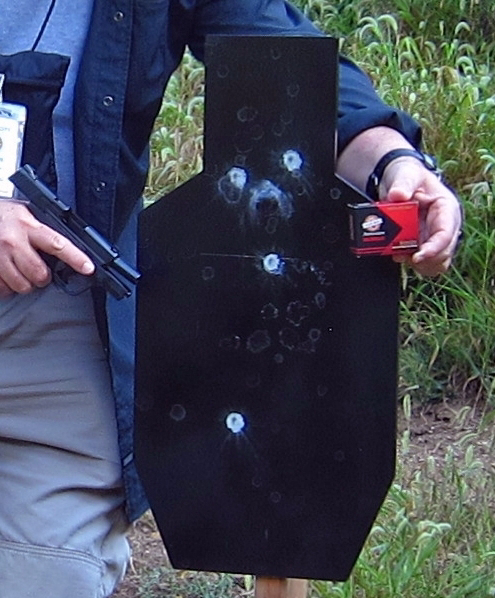 I practiced singles from the holster, timing each evolution. It was apparent the gun was getting there quickly enough but I was spending too much time “confirming” before mashing the trigger. I had a total of 12 rounds of carry ammo left, so I worked on each draw compressing the time between “sights” and “press.”

As the singles got below two seconds – 1.96 from ten yards to a good hit – I elected to try one more pair. They were inside, down zero, in 2.46 seconds.

Still slow, but (1) the Nighthawk IWB is a close (discreet) concealment option. I have to claw the gun out. (2) The shirt was clingy and not a rigid concealment vest. It’s more likely the class of garment that will be in use on hot days, hence the reason I used it here: worst case scenario. I was identifying the limits for an elderly man with on-coming medical appointments wearing discreetly with deep concealment.

The Wizard Drill serves as a documented level of achievement. It’s a benchmark anyone can replicate anywhere they’re allowed to draw from a holster on a readily available target – better when using the standard IDPA silhouette, but the IALEFI-Q is what I had.

Remediation: When you first arrive at the range, set up a standard benchmark of your choosing. Run it one cold, see where you are struggling. Then work on aspects of that stage; don’t just run the benchmark over and over. That wastes time and other resources.

Is 2.7 seconds, -1 “deadly?” No. It’s just not “passing” and it indicates a deficiency. I also find that this rig, carried as I do is an absolute limit – the stock (except for Talon Grip) Shield, full-power 115 grain ammo, floppy shirt and extremely close fitting, very discreet holster. I can pass the Wiz with this setup. I just can’t pass it every time without having some practice for an entire month.

And there’s another lesson. Practice – including dry practice – makes the difference.

The difference in the two guns? The older one has better sights, but I’m less than three seconds in difference on the comparative standards between the two guns; that’s a function of having to remember that the Apex Shield has a flat-faced trigger and I need to press it like a 1911, not roll it like a conventional striker-fired pistol or DA revolver as well as the difference in sights, etc. It’s nearly a wash. 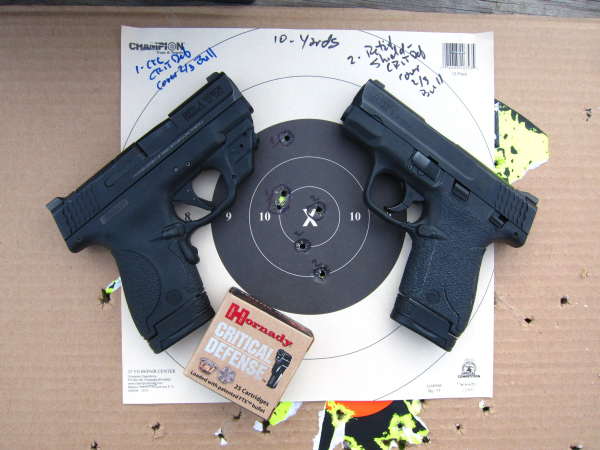 I finished by checking the zero of the (now current) carry load for short-barrel autos, the Hornady Critical Defense 115 grain FTX. My protocol to check zero – with pistols of this size – is to rely on the NRA B-8 repair center target at ten yards. I can then work steel or silhouettes – or both – from one pace out to fifty yards to see where I’m going. Covering 2/3 of the shaded portion of the target – the ‘bull’ – I found the Apex Shield to hit nearly zero for elevation, favoring a bit left. With the retail Shield, it shoots under the sights about 1 ½” and zero for windage.

That was my solution. It’s not for everyone, but it’s the direction I took.