Everyone I know in the shooting sports agrees that when it comes to competition, having more rounds in your gun is good. More rounds mean fewer reloads, and fewer reloads, at least for mere mortals (like me), means time saved. I also realize, however, that the old adage “you can’t miss fast enough to win” is equally true.

But have you ever considered that in a personal defense scenario more rounds might mean fewer rounds needed? Today, more and more shooters are carrying smaller pistols. Smaller pistols, ordinarily have always meant fewer rounds. But having fewer rounds in the gun was viewed as a tradeoff for more comfortable and more easily concealed (smaller) guns in our concealed carry holsters.

In any emergency situation, however, more is generally regarded as better than fewer, especially when you’re talking round counts in a handgun. So, engineers went back to their CAD programs and came up with ways to increase capacities without radically changing the overall dimensions of their small guns.

As a result, we now have very small guns that carry 11, 12, even 13, rounds. Much increased capacities, but not significantly increased manageability. In fact, not everyone can get enough grip on these tiny blasters to shoot them as effectively as larger guns.

Enter the “enhanced capacity” magazine. It might not seem like a lot, but adding a slightly extended magazine to anything from S&W’s M&P Shield to Springfield Armory’s new Hellcat can make a big difference.

Being “large framed” I always elect to go with the enhanced capacity magazine as primary and leave the smaller magazine as the backup. I’m not planning on emptying either, but I’ve never intentionally gone into a situation where I’ve needed my gun, either. So, for me, more- initially- is better.

Recently, Springfield Armory announced new “higher capacity” magazines for their very successful Hellcat. The Hellcat was already available with 13+1 capacities, but this new mag adds two more rounds, enabling you to have 15+1 rounds of 9mm in a micro compact. In case you’ve not been paying attention lately, round count is sort of a big deal in the hot new micro category.

But does the enhanced capacity really bring you any benefit other than more rounds? It’s a question I thought I could only answer by testing. So, I reached out to S-A and they graciously sent me a couple of their new 15-rounders.

A word of advice: If you’re getting these new 15-rounders, consider investing in a loading device of some sort. Trust me, your thumbs will thank you. They are stiff.

After loading both mags, I headed to the range for some decidedly non-scientific testing.

What I had in mind was simple: I would take two identical targets and shoot 13 rounds into both of them at the same distance. On one, I would use the 13-round magazine and the 15-rounder on the other. Then I would compare the results.

As it turned out, those two targets were all the testing I needed to be convinced that based on my personal shooting abilities (key factor), the 15-round magazine enabled me to shoot more accurately, and faster.

That might sound pretty simple to some of you, but the simple addition of the quarter-inch or so of gripping surface as opposed to the 13-round magazine yielded measurable results. 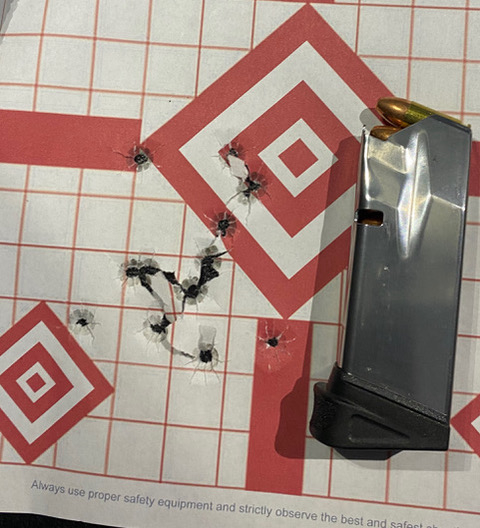 Sometimes side-by-side testing is the best way to measure differences. The only difference between these two targets is the magazine used to shoot them. In the first target (above) the 13-round magazine produced a respectable (for me) 4x4 grouping. Using the only slightly larger 15-round magazine, the same round count tightened into a 3x3 inch group (below). OWDN photos. 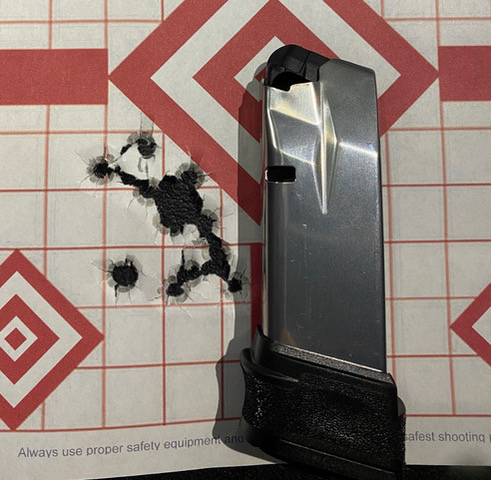 With the 13 round target, my shots landed inside a 4x4 inch area. For me, that’s not terrible, especially since I was trying to shoot as quickly as I could reacquire the target.

Using the 15 round magazine and the same shooting pace, 13-rounds tightened into a 3x3-inch space. That’s significantly better shooting, with nothing changing except the magazine length.

A simple, 26-round test convinced me that given my hand size, plunking down another $39.95 (MSRP) per 15-round magazine would be an investment in improving my Hellcat.

Not everyone’s hand size is the same -and not every pistol (including the Hellcat) includes a selection of grip inserts to help adapt the gun to your hand. But something as simple as trying the small gun you like with different capacity magazines (if they change the grip area) can make a difference.

For me, the additional two rounds enable me to shoot more accurately and faster. In a defensive carry pistol, I don’t see how I can afford not to make that investment.