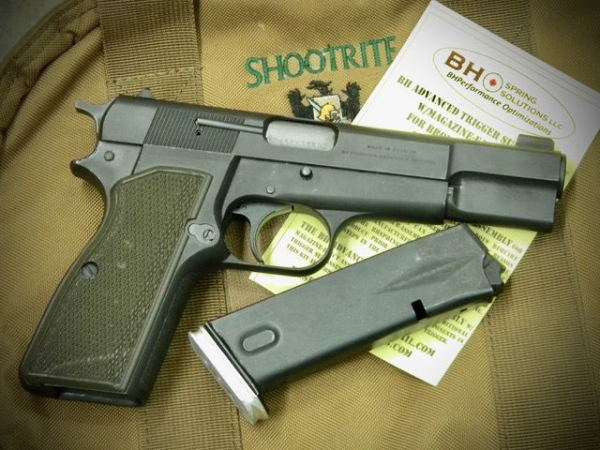 The BHSS trigger group performs great, looks good and is an affordable option for upgrading your Hi Power’s trigger -- plus, it fits the Hi Power clones as well.

When it comes to pistols, there’s no debating that the FN/Browning Hi Power is one of the greats. It’s an old design – 1935 – but the first “high-capacity” double-stack magazine-fed pistol and was fielded by both sides during WWII. It became one of the most extensively used military pistols ever. For a military pistol it doesn’t need a lot of modifications for concealed carry. About the only complaint heard about Hi Powers is their triggers. Fair, but far from Browning’s work on the 1911 and lacking compared to today’s defensive weapons. However, BH Spring Solutions has solved this issue.

I’ve been working on a couple of Hi Powers, but when on the subject of tuning the trigger pretty much everyone said the same thing: “Leave it to the experts.” This I understand, but you have to start somewhere. It was even difficult to find any material to study about tuning the trigger on the Browning. I discovered BHSS while researching the Tisas Regent BR9, a Turkish Hi Power clone and a gun I highly recommend. A couple years back BHSS released their “Advanced Trigger Sub Assembly” for Hi Powers. This trigger group cures a lot of Hi Power trigger maladies. 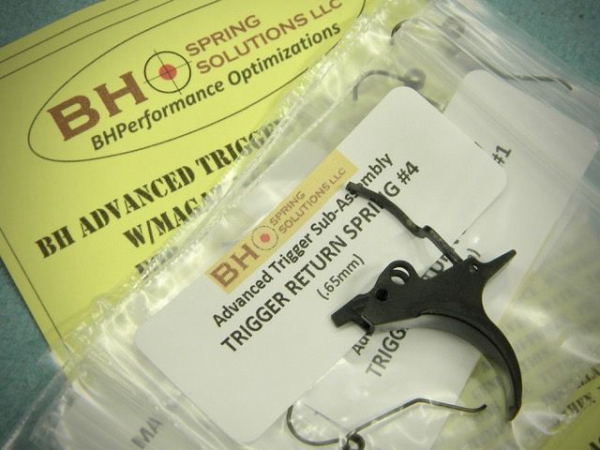 They reshaped the trigger, creating a new geometry that repositions the face of the trigger. This amounts to reducing some of the pivot and flattening the arc when pressing and resetting the trigger. The face is also wider, engaging with more surface area of the finger. The trigger pawl lever reduces metal-to-metal contact with frame when engaging the sear lever. There are four trigger return springs, allowing you to accurately tune the trigger’s weight. (There are two kit options – a “Tactical/Target” version, and a “Target” only option.) An additional spring can be added to assist with magazine ejection, another weak part of the Hi Power.

One thing some people may have a problem with is that the BHSS trigger does not permit use of the magazine disconnect, which prevents the pistol from being fired unless there’s a mag locked in place. There’re arguments on both side of this one.

I installed mine in a late 70’s Hi Power, which has served as my “test monkey” for several years. The factory trigger was squishy with a very faint reset. I can work with a little mush in the break, but for defensive work I have to have that “positive” reset. As mentioned, the kit comes with four trigger return springs. I have #2 in right now, which produces a consistent 6 lb., 2 oz. weight. I’ll experiment with #3 and #4, which will lighten up the weight slightly. The pistol now ejects mags better than any of my other semi-auto pistols.

Installation requires watching BHSS’s video, which contains detailed info on trigger work. As with all work of this type, it’s not a quick simple installation -- especially the first time it’s done. And yes, there is fitting required; it’s not a “plug’n play.” But if you have some fundamental skills and a few hours, it’s a good project. And any guns you do after this will go quicker. For those who aren’t so inclined, installation by a qualified gunsmith shouldn’t cost that much. Regardless of which route you take, after an initial investment of $124 – they’re on sale right now – you’ve got a Hi Power with a great trigger. For those who own Hi Powers and related clones but have been hesitant to have the trigger tuned, the BHSS trigger group is a great option to investigate.