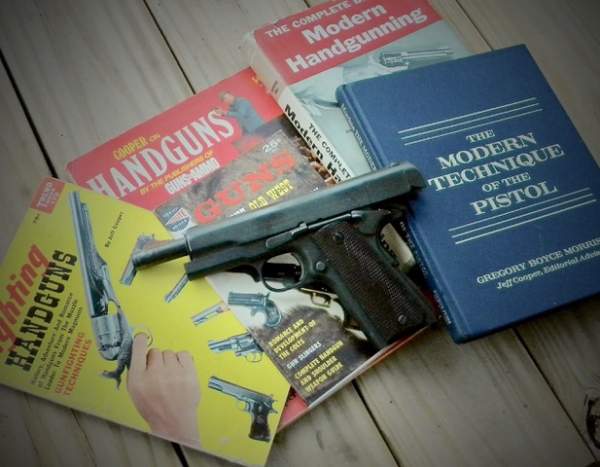 Most older shooters are familiar with Jeff Cooper - the father of the “Modern Technique.” Cooper laid the groundwork for the techniques for pistol fighting which are used today by pretty much everyone. Prior to his work there wasn’t really any two-handed firing of the handgun, even for defensive applications. Although Colonel Cooper didn’t invent all these techniques, he did codify them, spread the gospel about their advantages and open the first commercial firearms academy focusing on defensive shooting.

Cooper was a “gunman” in every sense. He began writing in the late 1940’s, ending up with twenty books and over five hundred articles/columns. My copy of “Fighting Handguns” - Trend Book #172 – was published in 1958. At this time firing was still done single handed. There’s some pics and info on using two hands. But, it’s using the support hand to grip the wrist of the firing hand for stability, not the “modern” two-handed grip we’re familiar with.

In the mid 1950’s Cooper began hosting pistol competitions at Big Bear Lake, California. These matches were – according to Cooper - “a free-style competition, never requiring the shooter to use any particular system or technique.” Firearm’s “fighting” rapidly evolved. Shooters began using a two-handed grip. Jack Weaver hand a stance that helped produce rapid and accurate hits. The focus was to “… hit quickly and hard under all sorts of unusual and restrictive situations.” Cooper observed all this, then assembled it into one package with a healthy dose of the “combative mindset.” The “Modern Technique” was born.

In 1975 Cooper founded the American Pistol Institute – in 1992 this became Gunsite. Today, opening a shooting school is common place, probably too common. API was revolutionary, the first commercial school for defensive use of firearms that civilians could attend - both law enforcement and qualified concealed carry holders.

Here Cooper and his instructors taught the Modern Technique. Shooters learned how to use the handgun efficiently, under a variety of situations including building clearing. The Combative Triad – Mindset, Gunhandling, and Marksmanship – was the focus, with handguns, rifles and shotguns. API/Gunsite was influential and popular, the mecca of defensive shooters. In fact, a lot of the instructors we know today got their start teaching at API/Gunsite - Clint Smith, Louis Awerbuck, Pat Rogers, Dennis Tueller and a host of others.

There’s no way to stress how crucial Colonel Cooper’s contributions were to "practical" shooting.” He was the first to really concentrate on the techniques necessary for using firearms as tools of defense, the methods of transmitting these skills to others and the main push to disseminate these principles to the gun community at large. One would do well to read all his works, and the works of those associated with him.

Yes, today we’re in the “post” modern age. While the principles/doctrines Cooper preached are still the same, some of the specific techniques used have evolved. For example, he taught a separate malfunction clearance for each type stoppage a pistol might experience. Today we use a more non-diagnostic approach; there’s no time lost trying to determine what type stoppage you have.

However, the fundamentals are and always will be the same. Plus, the more you know about the history of any subject the better you can evaluate the “new.” Which, as we all know, is not always “improved.”