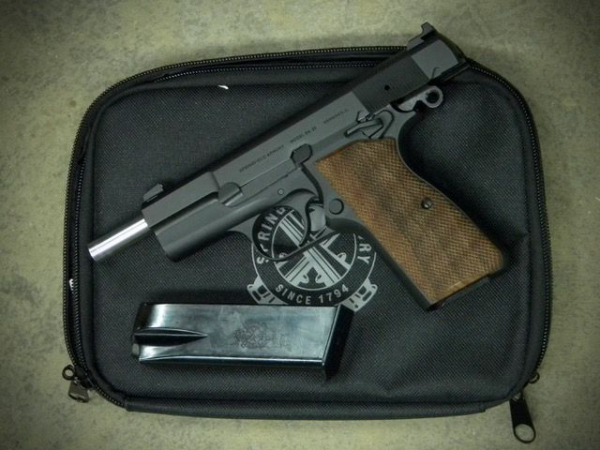 While the Browning Hi Power pistol is well known around the world, it never caught on here in the States. Too much competition from the 1911, which came out years before the 1935 Hi Power, and it was provided in .45 ACP, unlike the 9mm of the P35. The P35 does have a cult-like following. It was my first semi-auto pistol; a high school graduation present from my parents. Since then, I’ve always kept a few on hand. It was very disappointing when Browning stopped production a few years ago -- hence my joy to see Springfield introduce the SA 35, a Hi Power clone.

Designing the Hi-Power, the first pistol with a “double-stack,” high-capacity magazine, began in the 1920’s by John Browning in response to a request from the French military. Work on the pistol was finalized by his assistant, Dieudonne Saive. Sales began in 1935. Although the French didn’t buy it, many others did. Hi Powers were carried by both Axis and Allied troops during WWII. Since then, over fifty nations’ militaries and law enforcement have used the iconic pistol, including the F.B.I.’s Hostage Rescue Team.

After Browning stopped producing Hi Powers, they became very expensive. Cost is always a factor. Paying lots of dollars for a “real” Hi Power prevents a lot of shooters from exploring the joys of a well-made “Browning.” Sure, there have been some decent clones produced in the past. The Hungarian F.E.G. clone was very nice, and was used by several companies as a base for Hi Power builds. Argentina produced both Hi Power’s under agreement with FN, and clones after that. Israel made the Kareen. Recently the Tisas, a Turkish clone, was being imported into the States. For serious pistol work – defense – these clones required reworking to bring them up to specs. The same can be said of well-worn, military surplus pistols that were imported. The point is, there’s always been a demand In the U.S. for Hi Power pistols. Springfield Armory recognized this, and in October released the SA-35, a new Hi Power with plenty of promise.

The first thing I noticed when unboxing the SA-35 arrived was how good it looked, and even more important how well it felt in hand. I have a few original Browning pistols, and several of the clones mentioned above. One familiar with the Hi Power can feel the difference between a “real” Browning and the previous clones. The SA-35 copies the pistol’s traditional lines, with a couple of minor differences. It looks like an original Browning, and while it isn’t blued the SA-35’s finish mimics that of a parkerized military pistol.

Gripping the SA-35 feels just like an original Hi Power. The weight and balance of the forged frame and slide feel good. Ditto for the fit between them. Cycling the action feels like you’re manipulating an original Hi Power. Plus, Springfield reshaped the hammer spur to reduce the possibility of “hammer bite,” common for shooters with larger hands. The mag well has a slight bevel, a feature found only on custom Hi Powers. Springfield also removed the magazine disconnect; you can fire this Hi Power without a mag in the well, which I prefer. The trigger action and reset are the nicest of any factory Hi Power I’ve handled. It is smooth with a crisp break and short reset.

Based on first impressions, the Springfield SA-35 has a lot of promise. I need to take it apart to inspect internals, and then get to the range for test firing. Since I’m out of room, stay tuned next week for Parts II and III of this review.