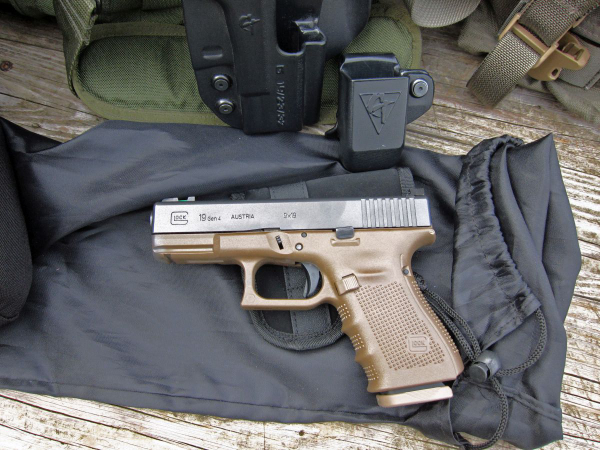 In a previous edition of the Tactical Wire, I told the tale of my ‘misfire’ at replicating an old but extremely relevant police “qualification” course of fire due to some (likely unintentional) misinformation from the internet. Further research showed I wasn’t tough enough on scoring, but that tale’s been told.

Why the course is so powerful is that it consumes only ten rounds of ammunition to evaluate the officer’s skill level in balancing precision and speed.

The first gun I tried on the revised targeting of the Waidelich/Bakersfield PD course was a full-size service pistol. For that I’d selected the S&W M&P9, an early rendition, this one fitted with an Apex barrel – the fitting done by the folks at Apex. I thought I’d done quite well and followed up with another gun, a compact/service pistol.

The second gun was the Gen4 G19. I took almost four years to get this Gen. 4 GLOCK 19 in shape to carry. The trigger was the worst I’d ever found in the Glock line and it got replaced with the Glocktriggers.com duty trigger, the “Guardian.” It took care of the trigger issue nicely. Extraction and ejection was “so-so” and I installed the Apex Tactical Glock ‘Failure Resistant Extractor.’ Problem solved.

A Vickers slide stop, magazine release button and magazine floorplates were installed, and – much later – the Trijicon DI (dual illumination) sights. The front sight has a heat resistant fiber combined with a tritium lamp, giving illumination from the front sight in daylight or dark. The ammo for both guns was the same, Winchester White Box 115gr. FMJ. The holster was the Comp-Tac paddle, along with the same firm’s mag pouch. Like with the S&W M&P9, all work was done from concealment.

To review, here’s the ‘high percentage’ part of the drill, lifted from Claude Werner: ten feet distance, start with hand on the gun in the holster. At the tone, draw and put one hit in the smaller scoring area of the target in one second or less. The ‘second stage’ for my benchmarks follows. 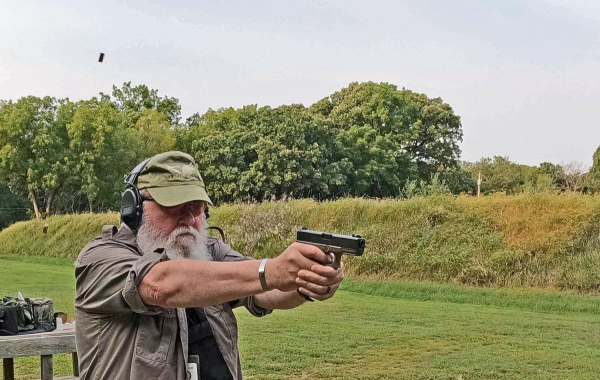 I was somewhat “warmed up” from the previous course and I proceeded to break the 1-second floor for the ‘high percentage’ shots, but threw in one miss – in the “head” of the silhouette but outside the head box. I restored some confidence in my ability by cleaning the Florida Dept. of Law Enforcement qualification Stage 2, as modified by me, with pairs into the B-8 target in .76 and .85 seconds respectively. The distance was ten feet and the starting position was a legitimate low ready. 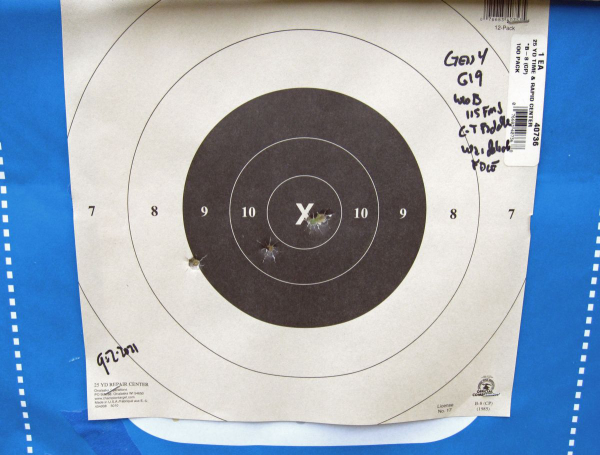 The Waidelich/Bakersfield PD course is described as follows –

The controversy was the target -- where the 7" circle for full-scoring didn't appear in the original social media post.

The adjusted times -- due to Wayne Dobb's correctly assessing the use of whistle and stopwatch -- appears at the pistol-forum.com discussion, here.

My success in the previous phase led to me wrecking the time component of the Bakersfield course with the G19, with one disastrous “failure to shoot while locked in,” generating a hit scoring only “five” (out of 10 points possible). The aggregate with seven points down on time was 88/100, clearly not my finest hour.

I know the gun is capable of better, but that’s what I did on demand.

My time issues were at the close end – 10 feet – and on the reload stage, though it wasn’t as bad as some earlier efforts with a larger target area. Finally, the distance stage at sixty feet was a timing and precision disaster.

And it wasn’t the gun. I don’t believe I need more practice with that platform – though it’s been an M&P Shield in my holster throughout the warm months this year.

There were shining moments – a few – with the 2012 Gen. 4 GLOCK 19. One particularly memorable stage was the FDLE Stage 2; Those times, quick as they were for me, yielded the hits you see in the image. That’s 39/40-2X if scoring it like a bullseye match – which we’re not.

The gun’s a great fit for me. The new sights – I wrote them up when installed, but this was the first outing with them, were superb. The Guardian trigger from Glocktriggers.com and the Apex extractor are still aces.

I just needed to settle down and shoot. Still, you learn more from your failures than your successes.

And the worst day on the range is better than the best day in the office.