In the recent news, an armed citizen was fatally shot in a shopping mall in Alabama by police responding to an active killer report at the facility. Soon, there was a call for ‘dialogue’ to prevent such a tragic occurrence.

Many of us were concerned with this possibility in the days before the proliferation of states with non-discretionary concealed carry permit systems (when there was only a single state with ‘no-permit required’ (so-called “Constitutional”) lawful carry of firearms).

If there were so few people lawfully carrying, who was concerned? The cops – because cops really don’t want to have to shoot anyone and often won’t shoot even when clearly justified to do so and because it might not be an armed citizen, but an armed off-duty peace officer (who’s also an ‘armed citizen). 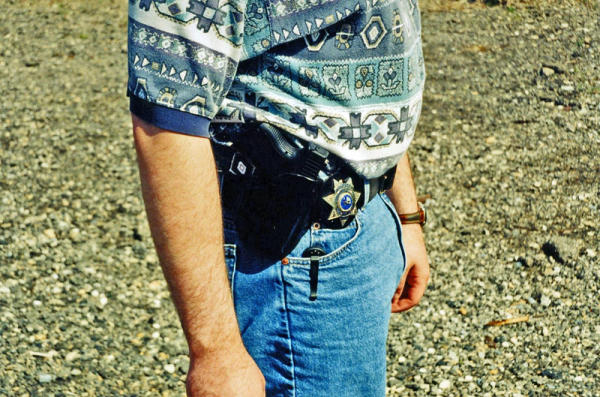 Armed citizens are at the point the cops were at decades ago: the threat of being shot by responding officers when you're not recognized as the "good guy." Badge on the belt was something, but in interactive scenario-based training, "good guy" role players were shot in all classes except one -- in a near-decade of classes.

Never heard of that? I’m not surprised. This was before the advent of social media, 24 hour news cycles and the proliferation of lawful carry of firearms. It was a real deal to people like Jim Cirillo (NYPD, US Customs), and other veteran firearms instructors. This was based on cases where an officer was killed in New York City by other responding officers. For a while they had “color of the day” and other cues, but they found out that it was often “see gun, shoot gun” when responding to a hot call. Jim did the first “plainclothes/off-duty officer” course I’d ever heard of.

I incorporated material I’d gotten from Jim through Massad Ayoob. In college workshops taught for criminal justice majors and in in-service training, I’d use interactive roleplay with ‘toy’ guns. This scenario-based experience included response to shots fired in which our students would run into someone armed with a gun – a role player who at no time acted in a threatening manner. We ran this for classes from 1994 to 2003, literally hundreds of students.

In only one case, did the responding officers not “shoot.”

In my notes from Ayoob’s Deadly Force Instructor course I’d attended at Firearms Academy of Seattle in 1998, there’s some discussion of the “post-shooting procedure” as it relates to dealing with responding law enforcement officers --

“Armed citizens are the faceless refugees in all of this. Excellent chance of mistaken identity shooting. It might be a detective who’s closest, or an off-duty cop who’s been flagged down. In some years more NYCPD cops are shot by other cops than by the bad guys. Back in the 1970s, in Law & Order, Mas came out with the three rings of safety. Originally for “plainclothes/off-duty officer survival.”

“Ring One: The message – cause a message to be transmitted describing the situation and describing you, the good guy . . .

“Ring two: The welcoming committee. Officers are to be met by someone they can trust to relay the message, before they come in to see me.

“Ring three - YOU. Bearing and demeanor – be nonthreatening to responding officers. Be where you can see them before they can see you . . . Be able to holster one-handed by feel. Have hand on holstered handgun. You’ll be told to drop it but it runs against instinct and reflex to drop your lifeline.”

All that assumes that there aren’t other armed ‘good guys’ (cops or not) present in the area when the event occurs. Still, having your back to something solid and having the piece safely reholstered can go a long ways to keeping safe.

Consider also that you can simply leave. This doesn’t mean sneaking out and hiding out from the law; it’s putting distance between you and the deadly participants of the event (just because he’s down doesn’t mean it’s over). As most people have portable communications devices, it’s easy to drive a ways from the scene and call for help – identifying yourself, giving a summary of the event and giving the location for officers to come and get you.

I saw a post on social media that was especially cogent. “While it is a concern, it is still rare, and the chances of it can be reduced by training of both responding officers and armed citizens. Some of the training is as simple as "After you had to defend yourself, (p)ut your gun BACK IN THE HOLSTER while keeping an eye on the bad guy so you reduce the risk of getting shot by the police."”

Another commentator noted, “It wasn’t a “racial” shooting- it was a fluid tactical situation. Guy with a gun….and his friend already down with a round in him.”

That's the direction this should take; what to do while your ears are ringing, pulse still racing and the smoke's still hanging in the air . . . it's education, not legislation nor litigation.

For more information on the issue generally: