The snub revolver has been rediscovered. We’re seeing more and more examples being offered by manufacturers and I don’t think they’d be offering them if there was no market. So here are some considerations.

Caleb Giddings, Gun Nuts Media, has a video discussing the “U” shaped utility curve of the snub revolver. Recently brought to my attention, it’s an interesting take and proposes this: the snub double action revolver has great utility for the inexperienced and mostly disinterested user – due to comparative simplicity in use, operation, handling and relative safety (if the user doesn’t cock the hammer) – assuming the user has the grip and hand strength to fire the gun double action.

He goes on to propose that the upside of the “U” curve is where the small wheelgun shines: for the real pro who can make best use of the remarkably concealable and quite accurate weapon. I’d add that’s true, even at distance.

I’ve made good use of the S&W M43c, an 8-shot, 11-ounce 22 LR revolver with a “white ball” for a front sight, on trigger-control exercises on the range. A similar 7-shot 22 Mag, the S&W M351C, is a handy, reasonably powerful package. Both require effort in finding the load that hits to the sights. Once you’ve done so, you find it’s easy to make hits at silly distances – in spite of the profoundly light weight of the guns. 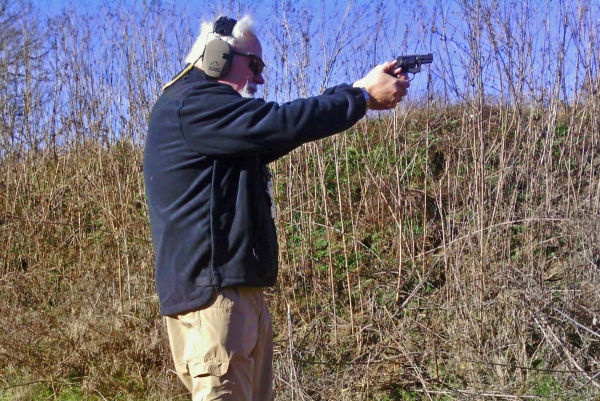 The 11-ounce, 8-shot 22 LR Smith & Wesson 43C is a range favorite. Having to hold the ultra-light gun still against the stout trigger while hitting a mark at speed is good battle practice. The target below is from that short-gun fired on Hackathorn's Wizard Drill.

Some time back, I shot the M43c on Ken Hackathorn’s Wizard Drill, using a cardboard IDPA target. I added a ca. 4-inch circle in the face of the target. The course requires you start with the gun worn as you’d wear it on the street. All starts are from the draw. Taking only five rounds, it calls for singles to the circle in the midst of the headbox inside 2.5 seconds – dominant hand only at three yards, both hands at five yards and at 7 yards, followed by a pair to the high chest “-0” from ten yards.

I had the gun in the front, inside the waist, worn in the Safariland Model 27 IWB holster. As it was low-30s temperature, it required some digging to get the gun out. Surprisingly I passed until I got back to ten yards, then failed by taking right at three seconds to hit, going over on time. I won’t make excuses for the long time it took to hit. That’s on me, not the gun. I’ve similarly gotten a pair in the -0 at thirty feet firing the Ruger LCRx 357 left-handed from the pocket holster – with .38 ammo.

Shooting the same gun on Justin Dyal’s Five-Yard Roundup got a 97/100 – good, close-range practice with a decent shot cadence on a reasonably small target.

For those who care to grow into the gun, snubs are capable of great performance. Too many people stay at the first peak of Caleb’s “U.” Shooting full-size police silhouettes at 9 feet and calling all hits within the silhouette “good” is a waste of a fine gun. 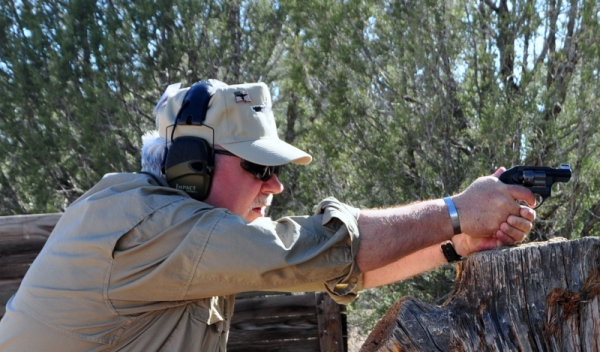 Shooting the Ruger LCR 38 on Gunsite Academy's "Scrambler" when the gun first came out showed my confidence in the gun. Hitting the 60-80 yard steel targets inspires confidence. Below, learning the gun is aided by some book learnin', using texts like Lovette's book on the snubby revolver. 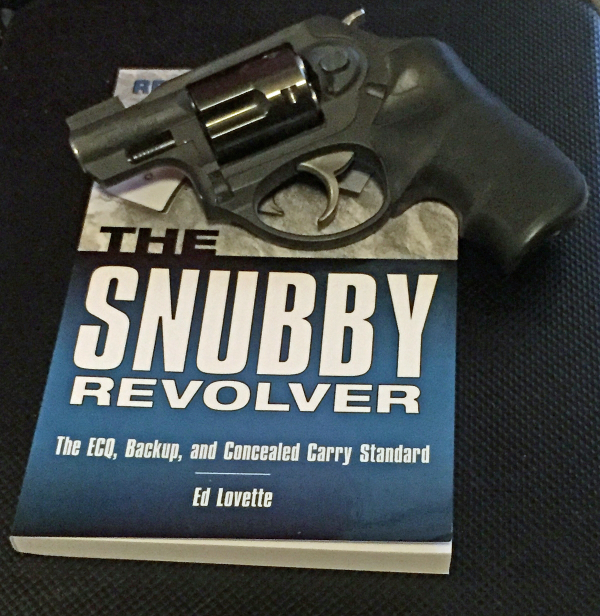 To improve, some reading doesn’t hurt for a start. Ed Lovette’s book on the snub is a good place to start and there are more resources out there. Dry practice is appropriate as well – consider the precautions of no ammo in the room, closing the door to prevent interruptions, and the target on a backstop which will safely absorb any errant, accidental rounds before engaging in the practice. At the end, announce aloud to yourself “Practice is over – I’m making ready for live fire.” Then, no more trigger presses.

The small gun – revolver or semi-auto – isn’t just a ‘good luck charm’ keeping the evil away. It’s a tool with a specific use. Being practiced at its best use is a good thing and can save lives.

I’m currently wearing the Ruger LCRx 357 backing up a GLOCK 19. Why all the guns? Because I’m a lousy predictor of future events. Better to have it and not need it. But there are times I’m wearing only the Ruger snub – like when I’m not leaving home for the day. It’s that last of the last resort solutions. I fired one of the early Ruger LCR 38s at Gunsite when the gun was being introduced. I used it on the Scrambler – hardly a close-range exercise. The gun was up to it. That supports my confidence.

For me, constant access to a snub is more than having that four-leaf clover; it’s the lifeline, the thing that can bring me back. As a result, I tend to shoot DA revolvers (mostly snubs) more often than most do. But it seems it’s a knack that’s coming back into style. There are applications the DA snub fits uniquely. Nothing else will do.