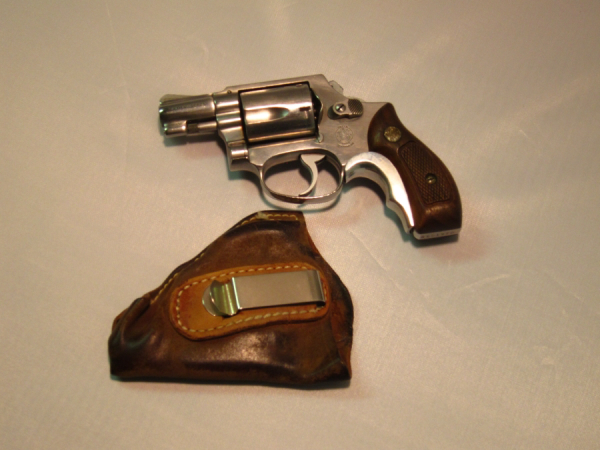 Far from being the "wrong gun," it could be the better choice. This S&W M60, purchased in 1978, was carried off-duty in this Bucheimer IWB and in a pocket for about the first 1/3 of Grassi's LE career.

A problem with the ‘Coronaville’ experience is the accumulation of content on social media. It’s not all bad. But even the stuff from YouTube channels to which I subscribe will have things I will find disagreeable.

One bit of content meant for new users was an attempt to help if you find yourself with “the wrong gun.” While I am a proponent of working to be able to use whatever firearm happens to be unused in a time of emergency, I have a problem with calling any of them “the wrong gun.” Mostly it’s the wrong user for that gun. The way to make them “the right user” is to help them do the work.

It’s appropriate now when a pair of revolvers have arrived for examination. Both current production and both from Smith & Wesson, they have vastly different chamberings while possessing great similarity in form factor and in intended use.

One was started my way due to a piece I saw from Caleb Giddings in which he made considerable sense about the most-minimal defense gun. The other was because I’d already had considerable use of a gun from the same product line from a number of years ago and it was time to see if the line was still sound. 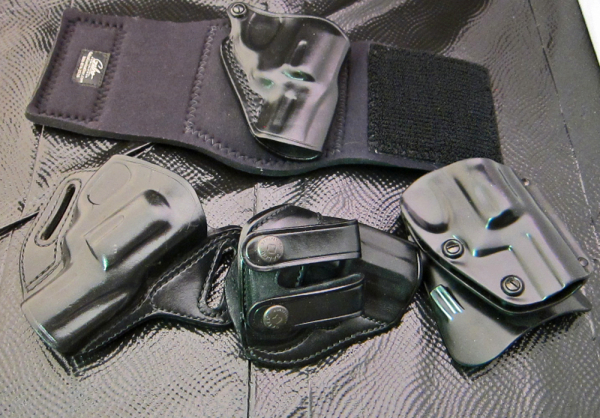 The most-minimal is due to caliber and weight of the piece; it’s the Model 351PD (meaning “personal defense?”). Chambered in 22 Magnum rimfire, it’s a seven-shot, 11.2 ounce revolver with a stainless steel barrel mounted in an aluminum barrel shroud. The frame and cylinder are likewise fabricated from aluminum. The gun has an external and accessible hammer – unlike its sibling the 351C, a Centennial-type revolver. The 351PD has a U-notch trough in the frame for the rear sight. The front sight is the HI-VIZ Fiber Optic with an orange tube. The stocks are visually appealing wood, and the gun measures a mere 6.2 inches with its sub-2” barrel.

The other gun is fairly close in form. The M&P340 is a five-shot, 357 Magnum with a similar barrel arrangement but with the concealed hammer of the Centennial series and has rubber stocks for the interface. Weighing in at just under fourteen-ounces, it’s a handful with ‘rhino-rollers’ but useful with 38 Special up to +P.

The previous example had the infamous internal lock. This one doesn’t. The original has given no problems over the years since its introduction (when I got it). Like the original, this one has the justifiably famous XS Sights 24/7 tritium night sight up front, with a 351-similar U-notch gutter for the rear. The cylinder, like the barrel, is stainless steel and is presented in black.

Now the issue, it seems, with new users getting little guns like these can be narrowed down to (1) the long, heavy DA trigger press required and (2) that the guns are little and they squirm around some.

Both are true. From there, we quickly go off the rails into “short sight radius” and “where does your ‘pinky’ go” and other detritus. Does any of that matter?

The folks worrying about ‘sight radius’ tend to be folks who can’t stay on the 8 ½”x11” paper at thirty feet with a target gun – some of those with a rifle. As to the small finger gripping the gun, trust me, if you have your grip sorted, you’ll be fine. 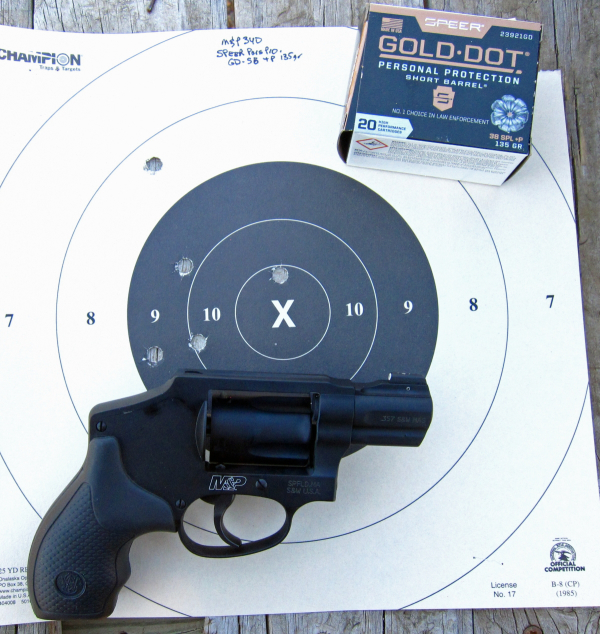 I started shooting small frame snubs in 1978, been shooting them ever since. During that time, I learned that the gun will exceed the user’s expectations in nearly every case – when in the hands of a user versed in its application.

My evaluation for these pair frankly started with the disparity of point of impact versus the point of aim. The baseline is ten yards – long range for some, short-to-moderate for others – on NRA B-8 bullseye repair centers, these from Champion Targets.

With the Magnum Rimfire, I used a small variety of loads that I was able to get with help from friends at Federal Premium/CCI and Hornady. These included Hornady Critical Defense 45 grain FTX and V-Max 30 grain as well as CCI Speer 40 grain Gold Dot HP-SB (short barrel) and CCI Maxi-Mag 40 gr. JHP. The rifle-class loads (Maxi-Mag and V-Max) tended low right of the bull while the gun-specific loads strangely and happily went center into the bull.

With scores very close, the comparatively mild-slightly heavier projectile Critical defense yielded just under 1,000 fps from my wonky-malfunctioning chronograph. The Gold Dot was profoundly hotter at around 1,250 fps with a bullet a scant five grains lighter. 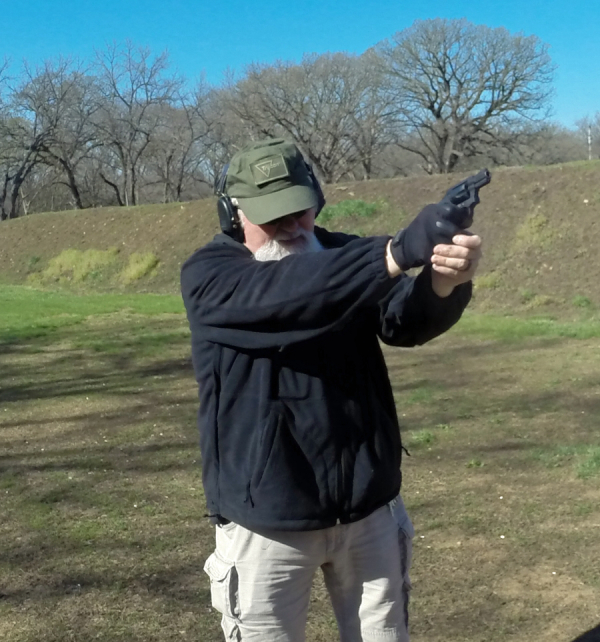 As to the M&P340, I held ‘ball over bucket’ in deference to the XS Sights for the 10-yard distance. I received the “S&W blister” at the proximal joint of the shooting hand thumb due to the torque and the stock rubbing when the gun violently turned. Changing stocks will fix that in short order. Using Federal Premium Personal Defense 120 grain “Punch” +P and Speer Personal Protection Gold Dot-Short Barrel 135 grain GDHP +P, I found they were hitting to the sights – kind of. The “Punch” tended a little left, still in the ‘black,’ in a cluster about 1 ½” high. The Gold Dot was likewise a lefty, and zero for elevation. I’m calling the stocks and my grip for the left tendency.

Both Hornady Critical Defense loads – the “Lite” 90 grain FTX and the 110 grain FTX – hit solidly center, as did Black Hills 148 grain Hollow-base Wadcutter. Remington 110 grain 357 Magnum was profound in the very light cannon, but likewise hit center for elevation, just a little left. The ‘dwell’ time in the air between shots was long; you could measure the split times with a sundial.

There was a ‘hitch’ in the trigger of the M&P340 creating a hard-press for one round out of five per cylinder. After the range session, I did a ‘factory adjustment’ requiring just about five hundred dry presses of the trigger.

In fairness to the social media type with the ‘wrong gun’ story, he had a student on the range shooting an inherited square-butt M36 S&W – and that student wasn’t shooting at a big target, but a sighting bull. The student hammered that circle with every shot, I believe. So much for ‘wrong gun,’ it was the right shooter.

So what about this pair of light, close concealment revolvers? We’re ramping up to stories about close concealment when you can’t successfully conceal a standard service or service-compact gun. This pair will figure into those stories.

And is the 22 Magnum ‘enough gun?’ Ask Bill Jordan. And if you don’t know who that is, shame on you.